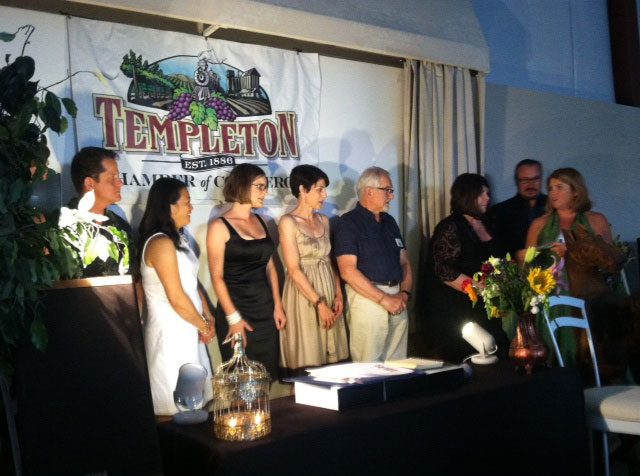 The Templeton Chamber of Commerce held its second annual Installation Dinner Saturday evening at the Groves on 41 event center. The chamber installed its new board of directors and recognized a citizen, ambassador and business of the year.

Business of the Year was awarded to McPhee’s Grill, recognizing their 20 years on Main Street and service to the community, including Rotary, Kiwanis, Boys & Girls Clubs, Women’s Shelter, Templeton Community Library Association, THS football team, Templeton Education Foundation, PTO, active military and many more. Max McPhee accepted the award, noting how lucky his family feels to be in a position to serve the community and a special thank you to their excellent staff was expressed. McPhee’s was prominently featured in the L.A. Times Travel section in May of this year, introducing Templeton to hundreds of thousands of readers, and has been written up in Sunset and Westways Magazines as well.

Citizen of the Year was awarded to a couple, Rob Rosales and Carry VanBeurden. Rob and Carrie have both served as President of the chamber and donated hundreds of hours to chamber activities and events over the past 10 years. Rob, a real estate broker, has served on the Templeton Area Advisory Group and currently serves as the volunteer Government Liaison for the chamber, a position his sister holds at the San Luis Obispo Chamber of Commerce. Carrie founded the Templeton Women in Business group, has been active in FFA and Grad Night at THS and with many other charitable events, while managing her family insurance business, VanBeurden Insurance Services, Inc.

Ambassador of the Year was awarded to Kristen Handley, who has assumed the presidency for 2014-2015, and has served simultaneously on the Board of Directors & Ambassadors committee, serving as the committee head for the Installation Dinner planning committee.

The silent and live auctions raised over $5,000 for the Templeton Chamber of Commerce.