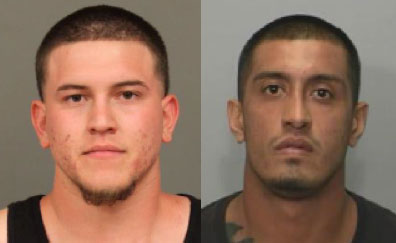 One man was taken to the hospital with head and body injuries and two suspects were arrested after reports of a Sunday afternoon fight in Paso Robles.

It began on Sunday at about 3:30 p.m., when the Paso Robles Police Department received a report of a fight in progress in the 600 block of Creston Road. When officers arrived, they were unable to locate any fight, but they did locate an adult female who told them her husband had been beaten up by two men. This female subject told officers they needed no further assistance and her husband was refusing to speak with them.

Later in the afternoon at about 5:50, the police communications center received multiple calls regarding a fight involving a large number of subjects armed with baseball bats and ‘tasers’ in the 500 block of Ferro Lane. When officers arrived, the subjects who had been fighting had dispersed but neighbors identified two particular residences that were involved.

Officers investigated further and located the victim of the earlier reported fight on Creston Road. This subject, a 22-year-old Paso Robles resident, was found to have sustained injuries to his head and body after being struck with a baseball bat. This subject was subsequently transported to a local hospital by family members for treatment of his injuries, which do not appear to be life threatening.

The investigation into this event led to the identification of two suspects. One suspect was located in the area and taken into custody without incident. He was identified as 20 year old Paso Robles resident Daniel Miranda. He was booked into the SLO County Jail for one count of felony battery.

The other suspect was identified as 24 year old Paso Robles resident Isacc Eric Gonzalez. Paso Robles Police officers collaborated with SLO County Probation Officers who detained Gonzalez at the probation department office in San Luis Obispo on Monday at about 2:30 p.m.. Gonzalez was arrested without incident and booked into the SLO County Jail for one count of felony assault with a deadly weapon.

The motive for this attack is still under investigation, but it does appear to be an isolated incident. The weapon involved, a small baseball bat, was recovered in the area. There was no indication any type of ‘taser’ device was ever used during this incident. The event does not appear to be gang related.

Anyone with information about this or any other crimes is encouraged to call the Paso Robles Police Department at 805-237-6464. Persons wishing to remain anonymous are encouraged to call Crime Stoppers’ 24-hour hotline at 549-STOP or by texting “SLOTIPS” plus your message” to CRIMES (274637).