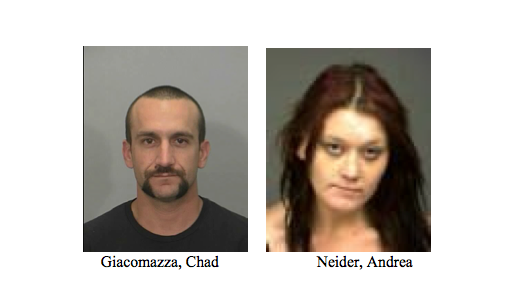 More than $2,000 stolen from home under renovation on Olive Street 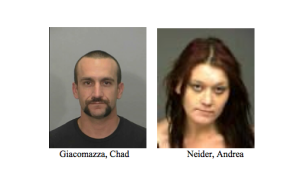 On Friday, April 19, 2013 at approximately 7:30AM the Paso Robles Police Department received a report of a residential burglary in the 400 block of Olive Street.

PRPD officers conducted an investigation and learned that over two-thousand dollars’ worth of tools had been stolen from this residence which was undergoing a renovation. A witness was able to describe the involved suspects and the vehicle which they were driving, and stated this burglary occurred at approximately 12:30AM on April 19th.

On Saturday, April 20, 2013 at approximately 8:00AM, PRPD officers and deputies from the SLO County Sheriff’s Office went to Giacomazza’s residence in the 3900 block of Buena Vista Drive. Giacomazza was located there and arrested without incident. His associate, 20 year old San Luis Obispo County resident Andrea Lynn Neider, was also located at the residence and arrested. During a search of the property, several of the stolen items were recovered and later returned to the victim in this case.

Police remind residents to be vigilant

The PRPD reminds residents to lock their homes and vehicles and secure valuables out of sight if possible. Also, report suspicious activity as it is occurring so officers can respond and investigate as needed.
The investigation into this burglary is ongoing. Persons with information about this crime are encouraged to contact the PRPD with information. Those wishing to remain anonymous who have information about these crimes, or other crimes, are encouraged to call Crime Stoppers 24- hour hotline at 549-STOP or by texting “SLOTIPS plus your message” to CRIMES (274637)