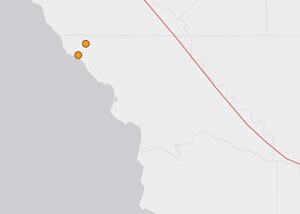 The first quake had a magnitude of 3.7 and hit at 1:53 a.m. It was centered 7 miles northeast of San Simeon and 25 miles west northwest of Paso Robles, the USGS reports.

A few seconds later, a magnitude-3.8 quake struck in the same area. The second temblor was centered a mile northeast of San Simeon and 27 miles west of Paso Robles, the USGS reports.

The quakes were described by the USGS as “light” in intensity. There were no reports of injuries or damages.