Father is charged with murder 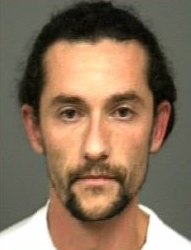 Last night at about 10pm, the two-year-old female victim of child abuse succumbed to her injuries and was pronounced dead in a bay area hospital. As a result of her death, her father, Herbert Brown III, has been charged with Penal Code Sections 187 – Murder, and 273ab(a) – Assault Resulting in Death of a Child

The autopsy of the child is scheduled for later this week and will be conducted by the San Luis Obispo County Corner.

Original report: On February 18, 2013 at approximately 5:00am, the Paso Robles Police and Fire Departments were dispatched to the 200 block of Santa Ysabel Avenue regarding a two-year-old female not breathing. The child had visible head and body injuries and was subsequently transported via ambulance to Twin Cities Hospital for treatment. It appeared the child was the victim of child abuse.

A subsequent investigation into the circumstances surrounding this incident resulted in the arrest of the child’s father Herbert Brown III, DOB 07/28/83, of Paso Robles. Brown was booked into the SLO County Jail on charges of Penal Code Section 273a(a) – Child Abuse Likely to Result in Death. The victim has been transferred to a bay area hospital for continued treatment.