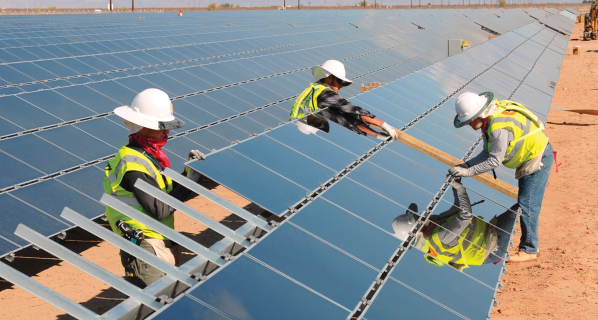 Authorities were investigating a valley fever outbreak that sickened 28 workers at solar power plants under construction in Central California.

California also is trying to stem a valley fever outbreak that has caused dozens of deaths among Central Valley prisoners since 2006. This week, federal officials ordered the relocation of more than 3,000 high-risk inmates.
Valley fever can cause flu-like symptoms. It is not contagious and stems from inhaling fungal spores released from desert soil. It can kill in extreme cases, usually among people with compromised immune systems.

Valley fever is endemic to the Southwest, with about a quarter of the cases in California and more than 70 percent in Arizona, according to the Centers for Disease Control and Prevention. The number of cases has risen over the years and topped 20,000 in 2011, the CDC reported. Officials did not provide details about who contracted valley fever at the solar sites.

However, one person was an electrician who inhaled infected dust while digging, said Mark Simonin, business manager for the International Brotherhood of Electrical Workers, Local 639 in San Luis Obispo.
That worker had breathing therapy but did not miss any work, Simonin said.Wearing a respirator can help prevent infection but workers laboring in desert heat are reluctant to wear them, Simonin said.

The plants’ developer, Arizona-based First Solar, was told in March that a small number of workers had flu-like symptoms but the company was unaware of the investigations, a spokesman told the Times.Scores of solar energy projects are planned for California and will require digging up large quantities of desert ground, creating dust. That has sparked public health concerns.

In Los Angeles County, Supervisor Mike Antonovich has asked health officials to look into implications of dust created during construction of a large solar plant in Antelope Valley.