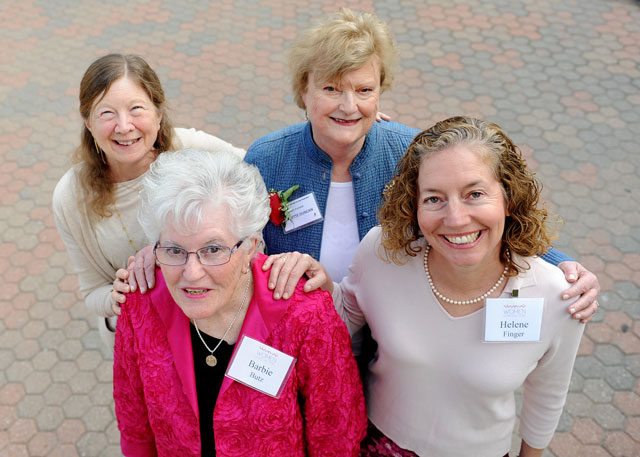 After a four-year hiatus, Women of Distinction Event comes back strong

It was a packed house at the 37th Women of Distinction awards ceremony, held March 20 on the San Luis Obispo Campus of Cuesta College. The college, along with the Community Foundation San Luis Obispo County’s Women’s Legacy Fund, hosted 120 community members and supporters of this year’s honorees. The awards honored four women from throughout the Central Coast for their professional and civic contributions. The honorees were nominated by their peers and chosen by a selection committee. Each of the award winners expressed gratitude and were humbled by the appreciation for their work.

Barbie Butz, who received the Grace N. Mitchell Lifetime Achievement Award, was especially honored because of a special connection.

“I knew Grace, so to receive an award named after someone you had the privilege of knowing, that is just extra special,” said Butz. “I also really appreciate the fact that the awards have been brought back because I feel that the recognition for women is so important, especially in our county because a lot of our women start with Cuesta College and then go on to do so much.”

Last held in 2010, the ceremony and awards returned with their original purpose – to celebrate Women’s History Month (March) and recognize the contribution that women have made in the areas of volunteering in the community, their profession and in philanthropy. Plans are in place to hold the event again next year.

In 2003, Sandy Richardson read an article about a pediatrician who had been helping local families with unmet financial needs. Richardson thought the process sounded doable and contacted five friends who invited their friends to a potluck, and Womenade was formed. Today, the non-profit serves San Luis Obispo County and donates items, time, and money to meet the essential needs of those in crisis. Since Womenade’s formation, more than $322,000 in funds have provided dental and medical care, diapers, furniture, rent, gas, groceries, and much more. Womenade is run solely by hundreds of volunteers, donators and Richardson.

Jeanette Duncan has been serving as executive director of Peoples’ Self-Help Housing (PSHH) since 1977. She is responsible for the non-profit multi-county (San Luis Obispo, Santa Barbara and Ventura) affordable housing agency and its 30 affiliated nonprofit corporations and limited partnerships, which provide a variety of housing and community development programs and residential construction services. Duncan also serves as president of The Duncan Group, a PSHH affiliate property management corporation. The Duncan Group’s mission is to raise the economic, educational and social levels of the beneficiaries of PSHH’s programs and services. Under Duncan’s visionary leadership, PSHH has grown to become a regional and national leader in affordable housing development, as well as one of the most respected and trusted names among non-profit organizations.

Helene Finger is the driving force behind the much-celebrated Society of Women Engineers of Cal Poly, San Luis Obispo, (CP-SWE), an arm of the College of Engineering that aims to support and promote females in science, technology, and mathematics. Finger is the faculty advisor for CP-SWE and has been the director of Cal Poly’s Women’s Engineering Program, which works with the university and industry to recruit and retain female engineering and computer science students by focusing on outreach, on-campus support, and professional preparation. The Cal Poly alumna has taught in the Civil and Environmental Engineering Department since 1997.

As a founding member and chapter president of the Assistance League of San Luis Obispo County, Barbie Butz was instrumental in the formation of the league in the early 1990’s. The League is a non-profit dedicated to recognizing the potential of volunteers in helping those less fortunate to a better, more meaningful life in SLO County. Butz has also served as the Atascadero parks and recreation commissioner, on the boards of the Atascadero Chamber of Commerce, the Atascadero Youth Task Force and the Colony Days committee. In 1995, she helped create Operation School Bell (OSB), a program to provide school-appropriate clothing to children living in poverty. Since the inception of OSB, 18,000 children have been clothed. She was also the driving force behind Coats for Kids of SLO County, which is in its 26th year of distributing new and used coats and sweaters to those in need each year.