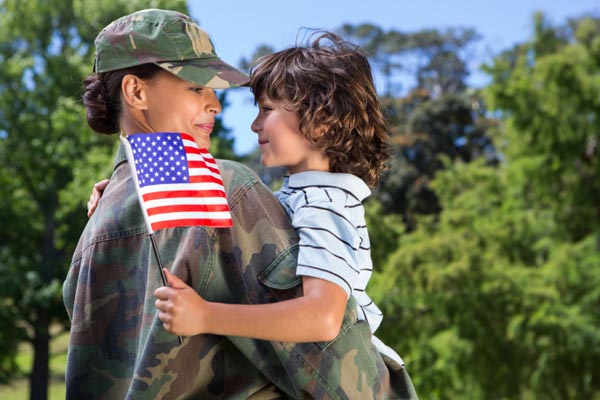 –Veterans Day brings images of flags flapping in the wind, uniformed men marching to Sousa tunes, the VFW marching behind their banner, some with canes or in wheel chairs waving to the bystanders. Sometimes a lone uniformed woman waves to the crowd. Does anyone see her? That’s a question many women veterans are asking.

San Luis Obispo County is home to more than 20,000 veterans and approximately 2,000 are women. They are family members, friends, business owners, professionals, community leaders and advocates. Women served in every major U.S. conflict and in peacetime, often fighting silent battles against opposition from their male superiors and counterparts; and doing so with dignity and honor.

Paso Robles resident Mary Demuth served as a Navy WAVE, a “woman accepted for volunteer emergency service.” During the Korean War said women in the Navy were not common in the 1950s and there were strong signals from the males that women didn’t belong. When asked how the perception of women in the service has changed, Demuth said, “It’s not much different. We seem to be invisible.” Demuth went on to say “You never see military women in the news when they come home. It’s about the men.”  The Navy WAVES were disbanded in in 1972 when the women took regular Naval ranks instead of a separate designation.

Jenny Frank from Bakersfield, served in the Marine Corps from 1989 to 1993 says she joined because, “I loved the pride, traditions and patriotism. I wanted to be a part of something that I so highly respected.” Atascadero resident Cindy Conn, who served 19 years in the Army joined to “Serve my country and have a job.” Both women had families during their service, Frank was married and Conn was a single mother. Both women served overseas with their families.

Conn said, “ It was difficult as a single mother. I had to be sure my children were taken care of while I was at work. In Germany, my children were problematic and it was hard trying to make the kids understand that I got in trouble for what they did. I was fortunate to have a nanny but ultimately, they were part of the reason I took the medical discharge from the Army.”

Frank felt pressured to leave the Marine Corp, “Having a daughter is the reason I got out of the Corps, with some pressure from a senior ranking Marine. I was in the process of re-enlisting, but decided against it after being heavily discouraged. Had I known then what I know now, I would probably have been a career Marine.”

Before being officially allowed into the US Military when the Army and Navy Nurse Corps were established in 1901 and 1908, women either volunteered or contracted their services as nurses, cooks, or the laundry. Today the role of women in the military has grown to include jobs that were once only assigned to men. Women are driving Humvees and trucks, escorting military convoys and piloting helicopters and airplanes on the battlefield. More than 150 women have been killed and over 800 wounded in the line of duty since 9/11. The Pentagon has set the groundwork to officially allow women into combat in 2016, but women are already armed and exchanging fire with enemy.

Women veterans are experiencing Post Traumatic Stress at the same rates as male veterans and the suicide rates of women veterans is climbing. The VA National Center for PTSD has published “Traumatic Stress in Women Veterans” which describes Military Sexual Trauma (MST), combat, feeling alone and worrying about family as major stressors for women. Women suffer PTSD at nearly the same rate as men. Of women veterans from Iraq and Afghanistan 20-percent have been diagnosed with PTSD and 27-percent of women Viet Nam veterans have been diagnosed.

MST is emerging as a major stressor for both women and men. The Department of Defense Annual Report on Sexual Assault in the Military for 2014 reports a “53-percent increase in victim reports of sexual assault.” A total of 6131 reports were made for fiscal year 2013 and 6500 for fiscal year 2014.

The suicide rates among women veterans is very close to that for men. The VA found that for women ages 18 to 29, veterans commit suicide at nearly 12 times the rate of non veterans. In every other age group, including women who served as far back as the 1950s, the veteran suicide rates are between four and eight times higher than for civilians of the same ages.

San Luis Obispo has multiple resource centers for veterans. Conn now works for the San Luis Obispo Veteran Center as the office manager and describes the center as “a one stop resource where any veteran and their spouse can get help.” Services include counseling for PTS and MST, transitioning into civilian life and helping veterans through the maze of benefits and services. To contact the center call (805) 782-9101 or (877) 927-8387.

San Luis Obispo County Veteran’s Services, a branch of the California Department of Veteran Affairs, helps veterans file for benefits, home loans and educational and employment benefits. It also administers the Veterans Treatment Court for veterans who have been arrested and want to address the behavior that led to the arrest. After successfully completing the program, the charges may be dismissed or reduced. For more information call (805) 781-5766.