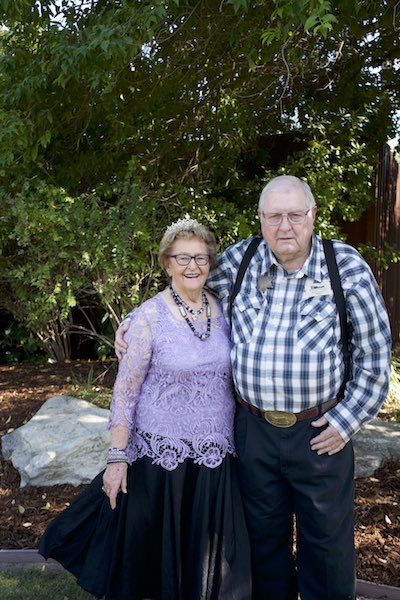 –The 88th Annual Paso Robles Pioneer Day is full of traditions, from the festive parade filled with tractors, wagons, horses, community floats, the free bean feed, and the royalty.

Since the first Pioneer day in 1931 a Grand Marshal and Queen have been chosen from families who have settled our area to reign over the celebration.

A Pioneer gentleman is chosen from the community and is honored with a beautiful Marshal’s badge that is presented at the Pioneer Royalty Dinner.

This year’s Marshal is Bob Tullock. He was born on Oct. 3, 1940 in Atascadero, the second child of Margaret and Bob Tullock. Bob spent some of his early childhood in the Bay area where his father was a welder in the shipyards. Bob returned to Templeton before starting school and attended Templeton schools first through twelfth grade. Following graduation in 1958, Bob bought a used BSA motorcycle and started racing dirt track. He worked for Albers Feed in Atascadero both working in the mill and delivering bulk feed. Bob attended Taft College and then transferred to Cal Poly. He proposed to Janet Brown, the love of his life and they were married and moved to San Luis Obispo in 1962. Their first two daughters, Judie and Peggy were born while Bob was at Cal Poly. As he approached graduation, two of his professors encouraged him to apply to graduate school at Purdue University in Indiana to pursue an advanced degree.

In the fall of 1967, the family moved to Indiana where Bob completed the MS and PhD in Soil Chemistry in five years and the family welcomed their third daughter, Terri. In the years following his graduation, Bob completed a postdoctoral position at UC Riverside, a temporary position at Purdue and two years at Oregon State. Bob yearned to get back to California close to his family; in 1976 he accepted a permanent faculty position at Cal Poly Pomona and settle the family in Norco, CA. He was very active in 4-H leadership with his wife and three daughters, raising sheep, goats, cows, chickens and pigs. During his tenure at Cal Poly Pomona, he led a horticulture project for the university in the Yemen Arab Republic from 1984 to 1987. This job carried the family through many countries in the Middle East, Africa and Europe. In the early 1990s, Bob and Janet built their dream house on land that had been part of Janet’s great-great grandparents 1862 homestead just north of Paso Robles. Bob is active in the Pioneer Day Committee, Templeton Historical Society, Paso Robles Historical Society, Pioneer Museum, Estrella Warbirds and Woodland Museum, and the Friends of the Adobe. He also enjoys his time in the Central Coast Model-T Ford Club, the Paso A’s (Model A Fords) and the early Ford V8 Club.

A Pioneer Lady is also chosen from the area to reign over the Pioneer Day festivities as the Queen. The Queen is honored at the annual Pioneer Ladies Luncheon and Tea.

This year’s Queen is JoAnn Arnold Switzer. JoAnn was born in 1936 as the first baby born at Mountain View Hospital in San Luis Obispo. Her parents were Guy and Grace Arnold. She was raised on the Arnold Ranch in Pozo, CA. Her grandparents, Thomas and Josephine Arnold came from Nebraska in 1913 first arriving in Santa Margarita where they purchased a General Merchandise store. In 1919 they bought the family ranch in Pozo where they farmed and raised Registered Hereford Cattle. Her father and neighbors were the driving force to get electricity brought to Pozo in 1947.

JoAnn was very active in the Pozo 4-H Club and was a County All Star. She showed the Champion lamb and the very first fair in Paso Robles in 1946, after she had always shown steers, which she still holds the record of having six 4-H Champion steers. At a young age JoAnn learned to do the registration papers for her family’s cattle, which she was able to use later in life working with Alex Madonna, a long time family friend. In 1973 she went to work for Alex Madonna taking care of his Registered Hereford business and traveling all over the Western States and Canada buying cattle and attending cattle sales as well as producing several production sales.

She has been in attendance and participated in every fair since 1946. She has served as the Livestock Superintendent for the past 14 years and as Director on the Fair Board for 8 years (1986-1994). She was a major force in starting Cattlemen and Farmer’s Day in 1987 and has served as Secretary and Treasurer of the SLO County Cattlemen’s Association for 33 years. In 1956 she married Don Switzer, together they had four sons, mark, Thomas, Joel, and Jefry, which she says is the very most important thing that she has accomplished and is most proud of is having four wonderful sons and beautiful daughters.

This year’s Pioneer Day Parade will be Oct. 13. The parade begins at 10 a.m. sharp at 16th and Spring, then travels south on Spring Street to 11th and going east to Pine Street (around the City Park). The parade will have approximately 200 entries, highlighted by the royalty, the covered wagon, and the largest collection of antique wagons, tractors, harvesters, automobiles, horse-drawn carriages, marching bands, military vehicles, and also float entries from schools and various organizations. Come out and celebrate Paso Robles and its history.