The data for the San Antonio and Lake Nacimiento water levels is provided by the Monterey County Water Resources Agency. For current rainfall and weather conditions at Lake Nacimiento go to weather.com. 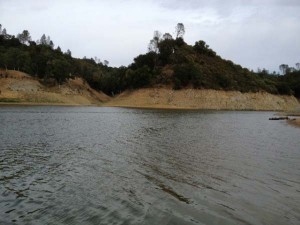 Lake Nacimiento is an 18-mile long lake on the Nacimiento River in northern San Luis Obispo County, California. The size of the lake varies on the annual rainfall and conservation releases of water by Monterey County. Lake Nacimiento has a capacity of 377,000 acre feet. The lake contains several arms including Snake Creek and Dip Creek, nearer the dam, and the central Las Tablas and Franklin Creeks. Because of the dragon-like shape created by the positions of these arms, it is sometimes referred to as Dragon Lake. The lake can fill quickly in the winter from river surges resulting from downpours upstream in the Santa Lucia Range so the level is not usually allowed to capacity until May 1 of each year.

Lake Nacimiento is an excellent fishery, but eating the lake’s fish should be done with extreme caution due to high mercury levels. An advisory on consuming certain fish species has been issued. The lake is unique among California reservoirs in that it contains, among other species, introduced white bass, which thrive in the lake and spawn in the river and inflowing creeks in Spring. Lake Nacimiento is also a haven for watersport enthusiasts. The lake provides ample room for waterskiing, wakeboarding, jetskiing, and other water-related activities.

The lake was originally designed for irrigation water and flood control as well as recreation. Nacimiento Dam, a 210-foot earthfill dam, forms the lake. The dam was built by the Monterey County Water Authority, which completed construction in 1961. The water authority uses the lake to recharge its groundwater. Even though the lake is entirely inside San Luis Obispo County, the waters are patrolled by the Monterey County Parks Department under a joint powers agreement with San Luis Obispo County.

The lake is home to two residential housing developments, which lie on the lake’s shore. The communities are named Heritage Ranch and Oak Shores. Except for the resort area near the dam, most of the property around the lake is private. Overnight camping on the lake, outside of the resort, is not allowed.