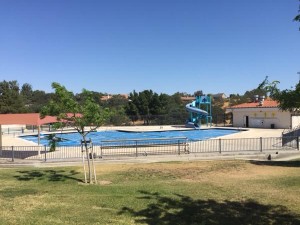 –After four years of being closed to the public, Paso Robles City Council is beginning to take steps towards getting the Centennial Park Municipal Pool reopened to the public. The pool was originally closed in 2011 as part of cost-cutting measures expected to save the city around $112,000 a year, and since its closure has saved the city $448,000. In May, the council approved a plan to re-open the pool, and proposed a timeline.

Earlier this week, councilman Steve Gregory spoke on KPRL about plans to organize a fundraiser for reopening the pool. He is currently reaching out to several businesses throughout the city to sponsor the event, and so far has gotten Firestone Walker Brewery, Hearst Ranch Winery, Paso Robles Daily News, and Odyssey World Café to agree to be sponsors in the fundraiser. The names of businesses that agree to sponsor the event will be hung on banners around the pool at the fundraiser to show their appreciation.

“For years the students in the Paso Robles School District have been missing out on the opportunity to participate in the swim program where they are taught to swim as a part of their curriculum at school,” said Gregory. “Water aerobics classes which were previously taught at the pool have been eliminated, tens of thousands of Paso Robles citizens have been missing out on all of these opportunities. By reopening the pool, we can bring back the swim program so that our children may learn to swim. My motivation is to get the people back in the pool, because for years our citizens haven’t had a public pool to swim in.“

The Paso Robles Firework Committee has given the council a $7,000 grant towards the $213,480 predicted to be needed to reopen the pool.

A fundraiser will be held on April 30th of 2016 to help raise money for the reopening of the pool. An island-themed pool party which is currently being called “Everybody in the Pool!” will be held at the Centennial Park and will feature food catered by the Paso Robles Culinary Arts Academy as well as live music and a silent auction.