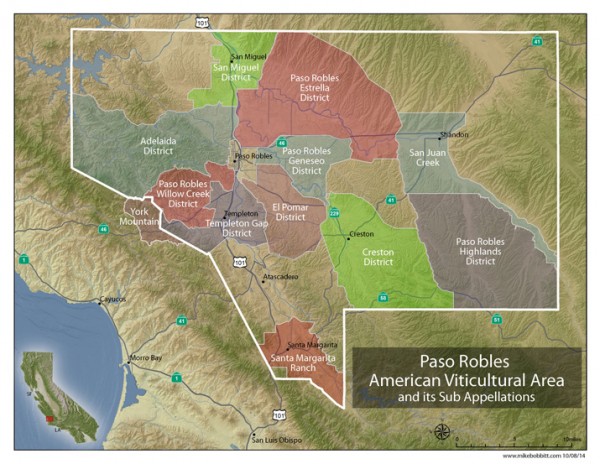 Map of the new AVAs from the Paso Robles Wine Alliance.

TTB is issuing this regulation in response to a petition from an association of local vintners and grape grower, the agency said in an announcement. TTB designates viticultural areas to allow vintners to better describe the origin of their wines and to allow consumers to better identify wines they may purchase.

Eleven petitions were submitted simultaneously last year by the Paso Robles American Viticultural Area Committee, a local wine industry group whose 59 members cumulatively own or manage over 10,000 acres of vineyards within the proposed viticultural areas. TTB designates viticultural areas to allow vintners to better describe the origin of their wines and to allow consumers to better identify wines they may purchase. In Notice No. 140, a notice of proposed rulemaking published in the Federal Register on September 20, 2013, TTB proposes the following new viticultural areas:

The 11 new viticultural areas are as follows:

‘We wanted science to prevail over politics in defining the boundaries of the new appellations,’ said Steve Lohr, chairman and chief executive of J. Lohr Vineyards & Wines, the largest producer in the Paso Robles American Viticultural Area (AVA), in the trade publication Decanter.com. ‘And we wanted to avoid future boundary skirmishes and confusing overlapping appellations that can occur when AVAs are proposed one at a time,’ he told the publication.

Lohr said the Paso Robles AVA is ‘one of the most diverse series of soils of any winegrowing region in the US’. There is often a 40 to 50 degree daily temperature swing during the growing season and a variation of 10 to 30 inches of average annual rainfall.

This final rule is effective on November 10, 2014. The public may view the record for the 11 new viticultural areas on the “Regulations.gov” website within Docket No. TTB–2013–0009. Copies of the relevant rulemaking documents may be found on the TTB website at http://www.ttb.gov.

“These new AVAs will be a powerful tool for wineries to explain why certain grapes are particularly well suited to certain parts of the appellation, and why some wines show the characteristics they do while other wines, from the same or similar grapes, show differently,” said Jason Haas, general manager of Tablas Creek Vineyard and Paso Robles AVA Committee member. “Ultimately, the new AVAs will allow these newly created sub-regions to develop identities for themselves with a clarity impossible in a single large AVA.”

AVA labeling provides information to consumers and trade about what is in the bottle, helping them make a better informed buying decision based on expectations of the region. Thanks to a conjunctive labeling law spearheaded by the Paso Robles Wine Country Alliance in 2007, the Paso Robles AVA retains top billing on a wine label with the individual districts serving as a way to fine-tune location and potential character of wines. While Paso Robles wineries are not required to use the sub-region on the label, when they do, Paso Robles will be printed with equal or more significance.

“Our AVA is an incredibly diverse region that has taken its rightful place on the world wine stage,” said Steve Lohr, chairman and CEO of J. Lohr Vineyards & Wines, and former chairman of the Paso Robles Wine Country Alliance. “These sub appellations will allow growers and vintners to tell their stories more clearly, which in turn will give consumers and the trade a much greater understanding of Paso’s diversity and complexity. Prior to this, Paso Robles was the largest non-county California AVA not currently subdivided. It is also an area with more diversity of rainfall, soils and climate than almost any other comparably sized region. We have been a great believer in this initiative since the beginning, and are proud that it has been accomplished in a way that will strengthen the Paso Robles brand with conjunctive labeling.”

The petition for the 11 new AVAs was filed in the spring of 2007 by the specially formed Paso Robles AVA Committee. A group of 59 vintners and growers, with the assistance of experts in a variety of fields, methodically crafted the submission with science as its standard. The petition proved to be the single largest AVA proposal ever filed with the United States Alcohol and Tobacco Tax and Trade Bureau (TTB) due to the scale and scientific data assembled to substantiate the request.

For information on buying or selling a winery in Paso Robles, find more information at Pacifica Wine Division. 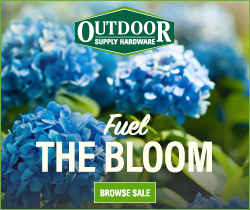