Castle Williams, a 2012 Templeton High School graduate and head owner and coach at The Pit North in Atascadero, will head to his third professional mixed martial arts fight on Thursday at Tachi Palace in Fresno. The 20-year-old has been training at The Pit North since he was 12 years old and fighting as an amateur since he was 16. He won his first two professional fights in June and August 2014, giving him a 2-0-0 record. He was slated to fight in November, but an illness sidelined him. 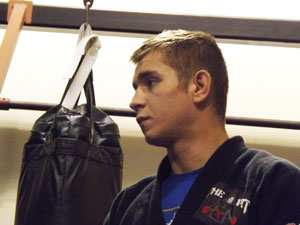 Though the illness kept him from fighting, it did not keep him from training. He said he’s been training hard since September and is ready for Thursday’s fight. His biggest concern right now is weigh-in on Wednesday, at which he needs to 146. The 5-foot-8 fighter said when he’s not getting ready for a fight, he usually weighs about 170 pounds. His first two professional fights he fought in the Phantom Weight class, which he said was a lot of work just to stay at 135 pounds.

The Templeton resident will take on Brandon Cohea of Porterville with a 2-1-0 professional fighting record. The doors to Tachi Palace Fight 22 — Champions Collide will open at 5 p.m. with the fight bout at 6 p.m. Tickets can be purchased at www.tachipalace.com. There will eight fights happening that night:

“It’s going to be a good fight, that’s for sure,” said Williams, who has been running The Pit North since January 2014. “The only part I don’t like about fighting is cutting weight.”

Williams said that Tachi Palace is not only one of the closest venues for fights, but also on of the best. “They’ve had a bunch of guys go directly from Tachi Palace to the UFC.”

Williams said that if the fight sells out, as it is expected to, it will be streamed live on www.sherdog.com.