The opening act of this weekend’s festival was held in the expansive barrel room of Cass Winery on the east side of Paso Robles. The two musicians call themselves the “Panic Duo.” They are a Los-Angeles based ensemble dedicated to the music of our time, freely mixing styles and periods, from classical and contemporary to jazz, modernist, and world-music.

Krzesimir Dębski’s Sonata for Piano and Violin, 2013, received its Central Coast premiere with the composer in attendance,. They also played Karol Szymanowski’s Mythes for Violin and Piano, 1915, and Henryk Wieniawski’s Polonaise brillante, 1870.

The Paderewski Festival returns this fall to Paso Robles for four days of music celebrating the life of Ignacy Jan Paderewski. The musical festival will be Nov. 7-10, 2013 and includes concerts, film, exhibit and master class. 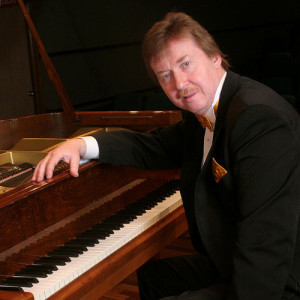 Festival organizers announced that Karol Radziwonowicz, the first person in the world to record all of the works of Ignacy Jan Paderewski, will be the festival’s gala concert performer. Other performances over the four-day Festival will include Chamber Music featuring violinist Pasha Tseitlin and pianist Nic Gerpe, Violinist Krzesimir Debski and friends showcasing jazz and film music, and a recital presented by the winners of this year’s Youth Piano Competition. Festival activities will also include a Piano Master Class with Karol Radziwonowicz, Documentary Film on Paderewski, and the Paderewski Heart Exhibit.

Krzesimir Dębski is a prominent Polish composer, violinist, pianist, and a celebrated orchestral conductor. Equally at home in the world of jazz and classical music, Dębski is celebrated in Poland for his numerous and highly popular film scores. He is also famous as a songwriter and arranger, and a composer of music for theatre.  In his November 8 concert Mr. Dębski will be assisted by the following artists: drummer Darryl “Munyungo” Jackson, popular singer and jazz vocalist Anna Jurksztowicz, guitarist Larry Koonse and bassist Darek “Oles” Oleszkiewicz.

The documentary film Paderewski: Man of Action, Success and Fame presents the history of the great Polish patriot, world-famous pianist and composer, statesman, diplomat, politician and philanthropist, who helped Poland regain independence after World War I. Paderewski’s deeds are discussed by several historical witnesses, including U.S. presidents Ronald Regan, John F. Kennedy, George Bush Sr., and Poland’s president Lech Wałęsa, as well as by the Primate of Poland, Cardinal Józef Glemp, and musicologists Jerzy Waldorff and Jan Popis. The film features Paderewski’s own piano performances and includes footage of his last journey from Arlington National Cemetery in Washington, D.C. to the crypt at the Basilica of St. John in Warsaw’s Old Town. Running time: 32 minutes. In Polish with English subtitles.

The Paderewski Heart exhibit traces a fascinating history of Paderewski’s heart, following his burial at the Arlington National Cemetery in 1941. Separated before the burial, Paderewski’s heart was embalmed and interred at the Cypress Hill Cemetery in Brooklyn, NY.  Rediscovered in 1960, it was eventually exhumed and reburied at the National Shrine of Our Lady of Częstochowa in Doylestown, PA in 1983. Over 20 large panels feature rare photographs and documents further explaining this captivating and little-known story.

World-famous pianist Karol Radziwonowicz was a First Prize winner at the Paderewski Piano Competition in Warsaw and the Słupsk (Poland) Piano Competition, and recipient of the Audience Award at the Liszt International Piano Competition in Utrecht (The Netherlands) in 1986. Radziwonowicz was the first pianist in the world to register the complete piano works of Ignacy Jan Paderewski on Selene Records, for whom he also recorded rarely-heard piano compositions by Polish composers Juliusz Zarębski and Karol Mikuli. In February 2010, a recording of Radziwonowicz’s interpretations of Chopin’s music was taken aboard the NASA Space Shuttle mission STS-130 to the International Space Station, an achievement marked by EMI’s release of the disc “Chopin: the Space Concert.”

Radziwonowicz will present a program highlighting two of Poland’s greatest composers of piano music, Frederic Chopin and Ignacy Jan Paderewski. The Chopin group will include Nocturne Op. 9 no. 1, Mazurka Op. 68 no. 2, Fantaisie-Impromptu, Op. 66, Grand Valse brillante Op. 34 no. 2, and will culminate in Chopin’s Ballade in F minor, Op. 52. The Paderewski selections will include Menuet Op. 14 no. 1, Cracovienne fantastique, Op. 14 no. 6, and Nocturne, Op. 16. no. 4. Paderewski’s magnificent Sonata, Op. 21 will close the Festival Gala program.