Updated Jan. 28, 2015: The move of the summer concert in the park series from Friday to Thursday was requested by a group of more than three dozen downtown Paso Robles business people. Below is a letter from them presented to the city January 24.

“On behalf of a large group of downtown businesses and restaurants we are asking the REC Foundation and City to have the 2015 Concerts in the Park on Thursday evenings,”

“In our previous letter to the REC Foundation we stated many concerns and reasons why we are seeking to move the concerts from Fridays to Thursdays. We cited our primary reason as lost revenue. For example, in polling just six downtown restaurants on the park, each restaurant experienced a loss of $1,000-1,500 per restaurant each Friday the concerts occurred. From just that small sample, the total loss of revenue was a minimum of $60K in 2014 during the nine week Friday night Concerts in the Park. Retail stores on the park report a 10-25% drop in sales during the concerts too and have considered closing their shops at 4pm on Fridays that the concerts occur. The other businesses listed on the bottom of this letter have expressed similar losses.

“Several of the restaurants and businesses have been part of the downtown landscape for many years. Villa Creek opened its doors back in 1998 and has been instrumental in putting Paso Robles’ downtown on the culinary map. They have noticed the steady trend in lost revenue over the past handful of years and have expressed concern and are now joined by dozens of downtown businesses and citizens.

“Over the past 30 days since our initial meeting with the REC Foundation we have been meeting with and discussing our concerns with the downtown business community, community leaders, members and organizations such as the Chamber of Commerce and Downtown Main Street Association. We have been met with overwhelming support and excitement about the possibility of having the 2015 Concerts in the Park on Thursdays. Here are several reasons why we believe Thursdays would be the optimum day for Concerts in the Park:

“We are grateful for the opportunity to open dialogue between the business community, the City and the REC Foundation and are hopeful that the concerts will be moved to Thursday’s in 2015.”

2015 concerts in the park move to Thursday nights 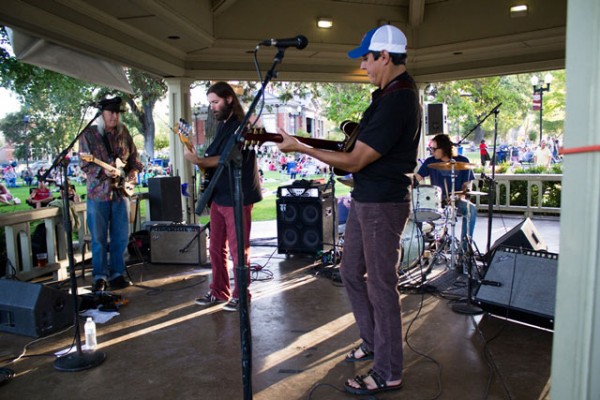 2015 Concerts in the Park is now rescheduled to Thursday nights. Photo by Nick Monzo.

The REC Foundation for the City of Paso Robles announced today that the 2015 Concerts in the Park series will be moved from Friday to Thursday evenings. The first concert will be June 18 in the Downtown City Park. The change is for a one-year trial basis.

The programming change was prompted by a request from many downtown merchants who cited a significant loss of revenue due to the concerts, lack of downtown parking, and general congestion in the downtown area on Friday nights.

The REC Foundation plans to evaluate the community attendance, merchant feedback, and general response to Thursday evening concerts and will determine whether to permanently implement the schedule change for the 2016 concert season.

The REC Foundation presents the concerts as a community service and has done so for over 10 years. Proceeds from concert sponsorships, wine and beer sales, and “pass the hat” donations are used to fund recreation events and enhancements at city parks including Centennial Park, Sherwood Park, and the Downtown City Park.

“We are trying to be sensitive to the needs of our downtown merchants and find a balance with our mission of providing quality programs to our community,” says Brandon Medeiros, Chairman of the REC Foundation.

Established in 2000, the REC Foundation is a non-profit fundraising organization committed to creating enhanced programs, places, and open spaces for quality recreational experiences in Paso Robles. To date, the REC Foundation has raised over $750,000 and invested back into the community. The 2015 Concert schedule and performers will be available by March 1, 2015 at www.recfoundation.com. For more information and sponsorship opportunities, please call (805) 237-3987 or email info@recfoundation.com.