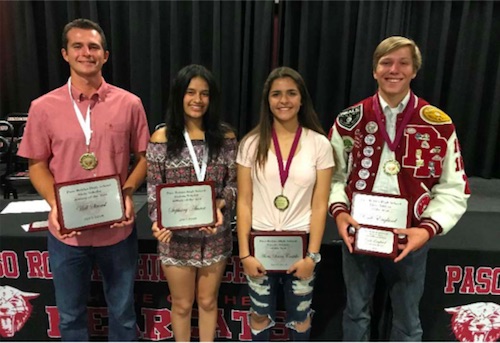 From The Vine, June 15 issue

—Cade England (football, track and field) and Alexis Serna Castillo (soccer) were recognized at a ceremony earlier this week. Also announced were the Scholar-Athletes of the Year. Congratulations to Will Stroud (baseball, 4.23 GPA) and Stephany Abarca (tennis, 4.11 GPA).

Alexis Serna was first team all-league for the Pac-8 and captain of the varsity girls’ soccer team. She was the Lions Club Award recipient voted on by her peers as well as the MVP. She was one of the top goalkeepers in the league for the last two seasons, always able to come up with the big saves.

Cade played an integral part in both football and track and field winning league titles. In football, he set the school record for the longest field goal (54 yards). In track and field, Cade’s best event was the triple jump where he was the Pac-8 League Champion and set the league meet record and the PRHS school record (held since 1991) with a jump of 46′ 5.5”. At the SLO County Meet, he won the long jump, triple jump, and was named Outstanding Field Athlete. At the Pac-8 League Meet, Cade won the triple jump, was fourth in the long jump, and seventh in the high jump, scoring 17 points for the Bearcats.