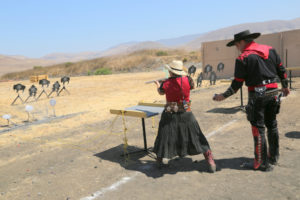 Over 300 cowboys and cowgirls will be descending on Chorro Valley Aug 10-13, arriving from eight states and two countries. This shootout, the largest Cowboy Action Shooting™ match in the West, is also the Single Action Shooting Societies (SASS) Western Regional Championship. The region includes California, Nevada and Hawaii.

Cowboy Action Shooting is a multi-faceted shooting sport in which contestants compete with firearms typical of those used in the taming of the Old West: single action revolvers, pistol caliber lever action rifles, and old time shotguns. The shootouts are role-playing enactments, requiring each participant to dress in costume and adopt a “shooting alias” appropriate to a late 19th century character or profession, a Hollywood western star, or a fictional character. Many event participants gain more enjoyment from the costuming aspect than from the shooting competition. The competition is staged in a unique, characterized, “Old West” style. It is a timed sport in which shooters compete for prestige on a course of different shooting stages. Each scenario, as they are called, features an array of situations, many based on famous incidents or movies scenes, in which the shooters must test their mettle against steel targets.

The event is free to the public and suitable for visitors of all ages. Please wear eye protection. Food and a variety of Old West themed merchandise, including jewelry, leather good, clothes, antique patterns and more will be available from more than 25 vendors. The event runs 8 a.m.- 4 p.m. on Aug 10 and 9 a.m.- 4 p.m. Aug 12-13. For more information visit the organization’s website or contact Sam “Cole Younger” Cotton at (805) 550-5000 or cotton_sam@hotmail.com.

The Chorro Valley Regulators is an organization created to preserve and promote the sport of Cowboy Action Shooting™ and is one of the first clubs to affiliate with The Single Action Shooting Society.