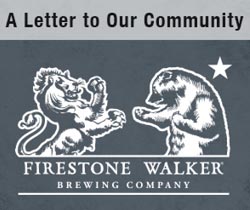 “I wish I could end this thing tonight,” Firestone said.

At the April 7 Paso Robles City Council meeting, Adam Firestone stood up during the public comment portion, and verbally apologized to the council and to the citizens for the smell that has been emanating from the recently installed wastewater ponds.

Firestone explained that the system came online a few months ago, and said that the team at the brewery were, “absolutely bushwhacked” by the resulting smell. “It’s crushed the employees and the people who live here,” Firestone said.

Firestone said that they have confidence in the engineering team and that the system will begin to function as planned. “We have done everything possible that we can do to speed the balance of the pond,” he said.

Firestone also said that the brewery recently received donor sludge from other plant, making the smell even worse in recent weeks, but now, it’s getting better. “The smell represents the vigor of the bacteria. We’re told that the bio load is down to 25% of the peak,” he said.

Firestone has also rented two portable wastewater plants as a backup. The brewery has also brought in night fans to help keep the air moving above the ponds at night.

“People have been asking, ‘Is this another Harris ranch?’ The answer is unequivocally: no,” he said. “I wish I could end this thing tonight.”

Firestone lamented spending decades winning over the community and creating a loyal fan-base, “just to lose it in three weeks,” he said.

While this comes as little consolation, the lab chemistry continues to improve. (For those that understand waste water, the BOD in the ponds started at 5,000+ BOD and has now digested down to 1,184. The target is 380 at which point the water may be discharged.) That doesn’t mean they don’t smell now, but only that it is not as severe as last week or the week before. We know it is still unacceptable and we are doing everything known to science to accelerate development.

The engineers insist that this is how ponds must evolve and we need to remain patient. As you can imagine, we are not that patient. Upsetting neighbors is taking a toll on everyone here. Our staff live in this community and feel the same pain.

Our accelerated measures include two large rented portable waste treatment systems that are currently being driven here from Canada. The engineers are convinced they won’t be needed but we are looking for back up. Today in the cold rain, they were totally odorless. That plan for a rainy winter was a fantasy. It has been mostly warm and still as everyone knows.

Some who live closer may hear the fans running in the night. These are portable vineyard anti-frost fans that we installed. This is simply to help prevent pockets of odor from forming. They are only temporary. We will remove them when the smell abates.

The biggest single question we get is this:

“Is this what it is going to be like from now on?” The answer is “absolutely not”.

There are places like Harris Ranch who have very smelly operations that become part of the landscape. Those who grew up on a dairy farm or near a fish cannery know that some odors are permanent. This is not the case here. This is only part of the pond start-up process. As they filled, they became stinky and until the organic food is decomposed by the bacteria, they emit odor. As the food is consumed, the smell abates. The aerators then keep the smell down. It is the same system – aerobic digestion – used universally.

We are grateful for your understanding. That so many are so patient is humbling.