Paso Robles News|Saturday, January 28, 2023
You are here: Home » Sports » After beating the Saints, Eagles will travel to CIF playoffs Friday

After beating the Saints, Eagles will travel to CIF playoffs Friday

The Templeton Eagles celebrate their 55-25 victory over the Santa Maria Saints. The Eagles earned a wildcard spot in the CIF playoffs and will travel to Cerritos on Friday, Nov. 13 to face the Valley Christian Crusaders at 7 p.m. Photo by Penny Fuentes

–On Friday, Nov. 6, Templeton hosted Santa Maria in an exciting last game of the regular football season, with the 55-25 victory over the Saints resulting in the Eagles earning a wildcard spot in the CIF playoffs.

Prior to the start of the game, the hometown crowd cheered for students during Senior Night as the senior class Eagle athletes were introduced alongside their parents. In addition, the evening was deemed Breast Cancer Awareness Night, with breast cancer survivors welcomed and celebrated for their recoveries. 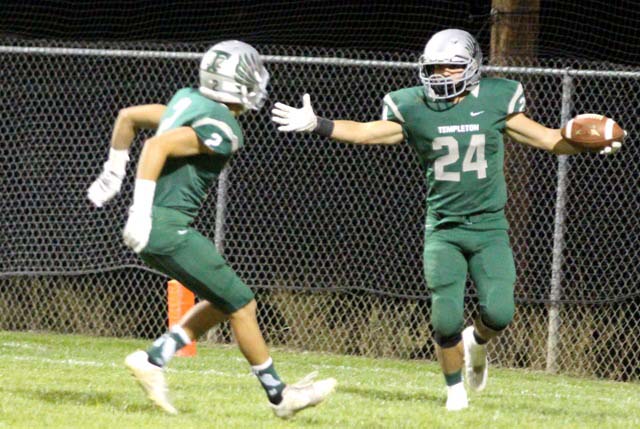 After scoring one of his two touchdowns in Templeton’s 55-25 win over Santa Maria, Michael Capelli is congratulated in the end zone by fellow Eagle, Brandon Bracy. Photo by Penny Fuentes

Templeton quarterback Jordan Bernal had 10 complete passes for a total of 143 yards passing. Michael Capelli was unstoppable in his two touchdown runs for the Eagles, breaking through every tackle coming his way.

Nate Avery led the rushing yards with an impressive 112 yards in 13 carries, while Matteo D’Alfanso led receiving with four catches received for a total of 128 yards for Templeton. 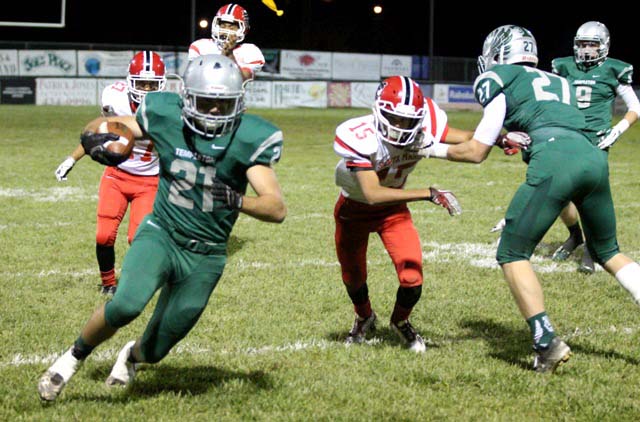 Nate Avery runs past a slew of Saints on his way to scoring a touchdown for Templeton. Avery finished the game with 112 yards in 13 carries and scored three touchdowns for Templeton. Photo by Penny Fuentes