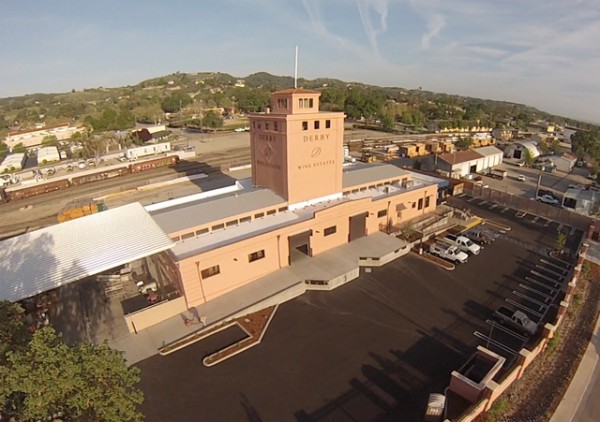 Application will be considered in Sacramento on Jan. 29

–At the most recent Paso Robles City Council meeting, the council unanimously voted 5-0 to have the mayor sign a letter of support for the Almond Growers Association Warehouse historic nomination to the National Register of Historic Places.

The “Almond Growers Association Warehouse,” also known as the Farmer’s Alliance, is now the Derby Wine Estates building, located at 525 Riverside Avenue. In 2006 an historic evaluation concluded the building, built in 1922, is an historic resource.

Ray and Pam Derby, of Derby Wine Estates, moved to the Central Coast in the early 1990’s with the intention of retiring. In 1998 they purchased their first vineyard property, now known as Derbyshire Vineyard. In the years following, Ray acquired the historic Laura’s Vineyard in east Paso Robles and a westside property, Derby Vineyard. In 2008 Ray and Pam launched Derby Wine Estates and soon were looking for a building to serve as their grape processing location.

The building that is home to Derby Wine Estates was purchased in 2010 with grape processing and a tasting room in mind.

The project restored the architectural integrity and function of the building, and returned the building back to its original purpose of agricultural production.

Nominations for listing national historic properties come from State Historic Preservation officers. A professional review board in each state considers each property proposed for listing and makes a recommendation on its eligibility.

The commission is soliciting public comment on this matter and has contacted the City of Paso Robles regarding the process. The Derbys requested that the city provide a letter to the commission supporting the nomination.

In addition to honorific recognition, listing in the register has the following results for historic properties, according to the National Parks Service: