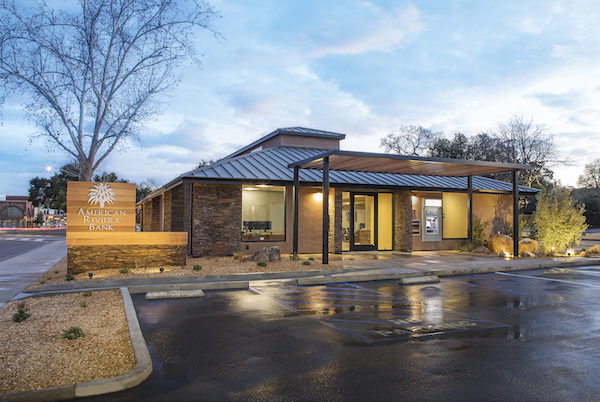 – American Riviera Bank announced it is celebrating 15 years on the Central Coast this week. The bank provided lunch for account holders at each of its branch locations on Friday, July 16, to celebrate.

American Riviera Bank opened for business on July 18, 2006 at 1033 Anacapa Street in Santa Barbara, California with the support of approximately 400 local shareholders. Michelle Martinich, the Bank’s Chief Financial Officer, was a founding executive along with a board of directors from the local community. On that day, the bank had fewer than 20 employees, four of whom were executives. Jeff DeVine joined the team in 2008 as president and chief executive officer.

The years that followed have been a time of tremendous growth and community support. In 2012, the bank opened its residential lending department under the leadership of Lori Murray. In 2013, American Riviera expanded into Montecito, opening a new branch in the San Ysidro Village. In 2016, the Bank merged with The Bank of Santa Barbara, adding a branch in Goleta on Calle Real and a Small Business Administration lending department. Through the merger, Joanne Funari was added to the Executive Team as Executive Vice President and Chief Operating Officer.

American Riviera Bank expanded the depth and expertise of its executive team in 2019 by adding Chief Risk and Chief Technology Officers in preparation for exceeding $1 billion in assets and future growth. Currently, the Bank employs almost 125 employees across five branches and residential and commercial lending offices. The Bank has been recognized as a Pacific Coast Business Times “Best Places to Work” the past two years.

American Riviera Bank’s fifteenth year was not without its challenges. The pandemic put community banks on the frontline as businesses on the Central Coast were faced with unprecedented hardship. The bank funded $118 million in Small Business Administration (SBA) Paycheck Protection Program (PPP) loans to 614 businesses in 2020, and its SBA Department is still actively assisting clients to obtain forgiveness on those loans. In 2021, the bank funded an additional 420 PPP loans totaling $68 million. To date, the bank has been successful in obtaining forgiveness from the SBA for more than 700 of the total PPP loans, with only a handful still remaining from the first round.

During the COVID-19 pandemic, American Riviera Bank supported over 150 nonprofit organizations on the Central Coast through its donations and sponsorships program and, in lieu of its annual Customer Holiday Party, gave an additional $75,000 to nonprofits chosen by its customers. The bank’s Employee Directed Donations program granted additional donations to 10 nonprofits. As a member of the Federal Home Loan Bank, American Riviera Bank was able to maximize the benefit of its donations to organizations like the Foodbank with matching funds. In addition, the bank provided Personal Protection Equipment (PPE), including alcohol wipes, spray, and masks at all locations for the public, as well as partnered with the Goleta Chamber of Commerce to offer PPE to businesses in need.

For ten consecutive years, American Riviera Bank has been recognized for strong financial performance by the Findley Reports, and has received the highest “Super Premier” rating from Findley every year since 2016. The bank is currently rated five stars by Bauer Financial and was rated “Outstanding” by the Federal Deposit Insurance Corporation in 2020 for its performance under the Community Reinvestment Act. In addition, bank employees have received numerous awards, including Jeff DeVine, President and Chief Executive Officer, being named “Executive of the Year” in 2019 as part of the South Coast Business and Technology Awards and Michelle Martinich, Chief Financial Officer, being named “Editor’s Choice CFO of the Year” by the Pacific Coast Business Times in 2019. Joanne Funari, Chief Operating Officer has been named as one of the Pacific Coast Business Times Top Women in Business multiple times and Chief Credit Officer, Eusebio Cordova, was a recipient of the 2016 Pacific Coast Business Times Latino Business Award for Banking and Finance and was also recognized as a Top 40 under 40 recipient in 2017.

“We are incredibly proud of what the Bank has accomplished over the past fifteen years.” Jeff DeVine, President and Chief Executive Officer, stated. “Community banking plays an integral role in our local economy, so we are grateful for our hardworking employees and for the support we have received from our customers and shareholders. Today, we celebrate all we have accomplished together.”