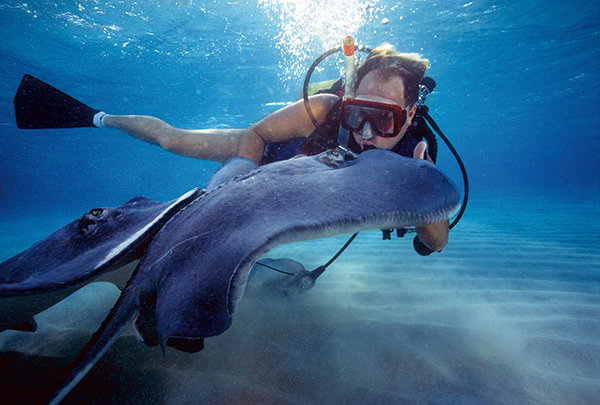 Artist Dale Evers has a passion for underwater photography and videography, and has been making mini-documentaries about his art for almost two decades.

–Local Artist Dale Evers has been producing videos about his art for almost two decades and now his next project looks to capture the cultural beat behind the visual, performing and culinary arts in Paso Robles. The video series will look at the cultural icons who live in the area who contribute creatively to the community, from winemakers to visual artists and beyond.

Evers said Paso Robles is loaded with talent. “This place attracts majorly creative types and that is why I love living and working here,” he said. “Now I have this desire to create mini-documentaries featuring Paso’s interesting, creative individuals.”

Evers began his career out of a barn in Cayucos 35 years ago, primarily as a sculptor and currently works out of his studio at 1000 Park Street in Paso Robles. He is most known for his sculpture and functional art designs, and he has pushed his creative urges into a variety of mediums to satisfy his artistic whims.

First there came Evers passion for underwater photography and videography, then he began creating mini-documentaries on his his own projects. “The videos gave me the opportunity to explore the creative process in stages and in detail,” Evers said. “I believe that it served as a form of personal enlightenment and growth at that point in my career.” Evers intends on featuring some of his older videos with new episodes of what he calls, “The Culture Chronicles.” 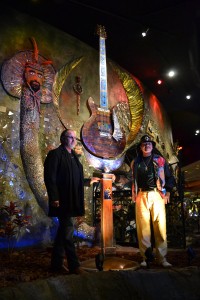 Many of Evers videos take a look at the process behind his art work and the people who are involved. One of his favorite videos “The Wings of a Legend” focuses on the development of a massive 13-foot Paul Reed Smith Guitar, a tribute sculpture for rock legend Carlos Santana. The video shows the process, construction and the inspiration behind it, a collision of visual and performing arts. The guitar was unveiled at the House of Blues, Mandalay Bay Resort Casino in Las Vegas to an awed Santana.

“When I was asked to sculpt a guitar in 2010 I was taken by surprise,” he said. “I couldn’t imagine how to improve on the beautiful shape of the guitar…Once I completed the first guitar I was on fire with ideas; it works like that you know.”

For those who don’t know of Evers career, he is a cutting edge American artist, sculptor and designer whose career spans over 35 years. Recognized for his stunning table designs, water features, and his ability to mix mediums at a unique and sophisticated level, his work blends fine art with functional design.

His creative aspirations have always reached beyond a streamlined sculpture career, having worked in underwater video and photography, writing, design and mixed media. Evers has a love of all things natural and all things Paso Robles, and has always pushed the envelope of creativity driven by inspiration.

Evers upcoming expansion of his video series will focus on Paso Robles cultural identity. A look at the local people who bring culture to the Central Coast, a veritable Paso Robles cultural beat. Everything from visual performance, actors, artists, to winemakers and the culinary arts. Keep an eye out for these videos for a peak at the art behind the scenes of Paso Robles.