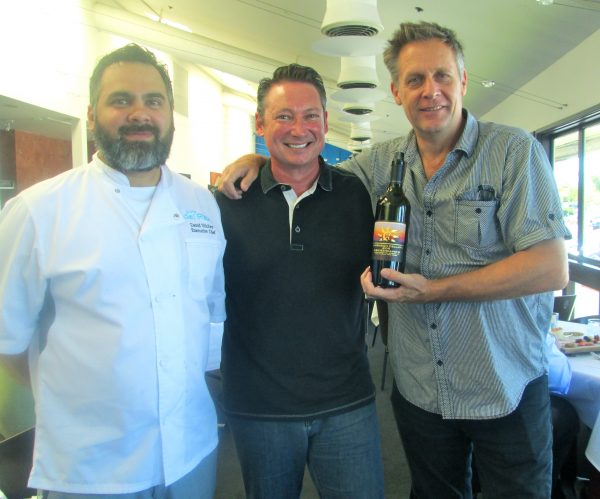 –Erick Allen, owner/winemaker of Ascension Cellars was recently in Los Angeles to present his portfolio of Rhône and Bordeaux blends. The wines were paired with Franco-California cuisine at a luncheon in Cafe del Rey, a popular restaurant in the yacht-dotted Marina del Rey harbor.

Allen crafts his wines with Old World sensibilities in Paso Robles’s east side Geneseo District. But his wines are anything but big and bold, that are typical of this appellation. Allen takes a European approach. “I produce wines that can lay down, that are age-worthy,” he said. “Low in alcohol and high in aromatics.”

Allen’s interest in winemaking was sparked in the early 1990s with visit to France and Italy. He was especially inspired by the Rhône style wines during his time spent in Châteauneuf-du-Pape, in France’s Rhône Valley. “I wanted to pursue the Rhône style here in California,” said the self-taught winemaker, who grew up with an appreciation of wine and food. 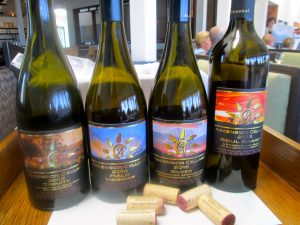 Allen learnt the techniques working with different winemakers and vineyard managers. In 2008 he met Steve Cass (of Cass Winery) who invited him to work on a Syrah project.

Allen crafts his wine the traditional way. The Rhone varietals get a two-year barrel aging and the Bordeaux wines age for three years. They both are bottle aged for another 12 months. Allen understands the downside of his inventory locked up without immediate return. “But that’s my business model,” he commented of his 1500-case annual production.

To preserve the wine’s aromatics, Allen takes the minimalist approach. He compares the precious aromatics to youth. “The moment it’s gone you can’t get it back,” he mused. Once the wine is in the barrel, he leaves it alone. “No manipulation, leaving wine alone is how I preserve the aromatics.”

From the whites to reds, Ascension wines are well balanced with fruit and acidity, aromas intact and low in alcohol (unusual for a Paso Robles wine.)

The watermelon pressed amuse with burrata cheese was a perfect pairing with the 2015 Ascension Silver Blanc, a blend of marsanne, roussanne, viognier and chardonnay — which adds a touch of crisp Gala apple quality to the wine, noted Allen. The 2014 Halo Viognier’s bright floral and fruit aromas made an ideal match with the red pepper humus and pita. 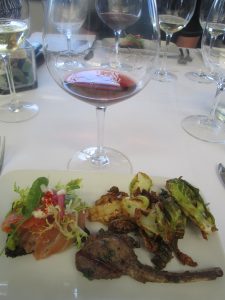 The 2013 Trinity, a grenache, syrah, mourvedre is Allen’s homage to Châteauneuf-du-Pape. “This is the style I fell in love,” commented Allen. Fragrant with rose blossoms on the nose and Bing cherry aromas with hints of spice, it was a match made in heaven with lamb lollies cooked with allspice and star anise and dressed in mint pesto. The same wine also paired well with the fattiness of smoked salmon served on pumpernickel toast.

The herbed short rib pasta fragrant with thyme was served with the 2013 Soul Shaker, a blend of cabernet sauvignon, merlot, petit verdot and syrah. Singing with notes of plum, dark berries and mocha, the inky wine was surprisingly low in alcohol with just 13.9 percent.

Over a delightful mascarpone cheesecake, Allen uncorked two additional wines — the 2011 Ascendence, a cabernet sauvignon/merlot blend with low alcohol, bracing acidity and wonderful fresh fruit on the palate. Allen explained that 2011 was a cool year in Paso, this was also the year that he decided to embark on the three-year barrel aging program. “This set the stage for all cabernet blends,” Allen said.

With the 2013 Testament, Allen launched his typical Bordeaux style — a blend of cabernet sauvignon, merlot, cabernet franc, petit verdot and malbec. “The collective soul of the vineyard,” noted Allen. The deep-hued wine is silky and lush and whispers traces of oak – a true testament to the winemaker’s Old World sensibilities.