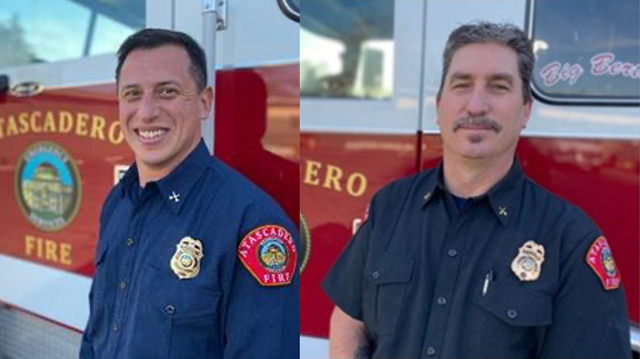 Atascadero Fire Captain Matt Miranda was recently promoted to fire battalion chief of operations. The position was vacated last year when former Battalion Chief Bill White retired from the fire service. Captain Miranda had been serving as interim battalion chief and was selected by Fire Chief Casey Bryson after an internal testing process.

Miranda began his fire service career as a reserve firefighter with Atascadero in 1999. He was hired full-time with the department as a firefighter in 2001. Miranda later earned a Bachelor of Science in Occupation Studies from Cal State Long Beach while working full-time. After two years, he was promoted to fire engineer then became a fire captain for the department in 2009. Miranda has been involved with a variety of programs during his time with Atascadero, perhaps most notably in department training. He is a founding member of the North County Technical Rescue Team and also took a lead role in fundraising efforts to purchase and customize the city’s disaster relief trailer.

Miranda’s service to the Atascadero community also goes beyond the fire service. He has spent years coaching youth sports, is active in the Atascadero Bible Church and volunteers his time with multiple city-sponsored events and community fundraisers. According to Fire Chief Bryson, “Matt brings many years of local fire service experience to his new position and has proven to be an effective leader in our organization. I know he will do amazing things in his new role to continue to support and develop our organization.” Miranda is a long-time resident of Atascadero along with his wife, Megan, and their two children.

Van Son grew up in the Santa Barbara area and began his fire service pursuit after high school by attending the Allan Hancock College Fire Academy. His fire service career began in 1988 when he began three fire seasons with the Santa Barbara County Hot Shot Crew. He then joined the United States Air Force and served three years as a firefighter/senior airman. Van Son was then hired in 1995 as a firefighter with the city of Great Falls in Montana. He later went on to obtain his Bachelor’s Degree in business and human resources from Columbia Southern University. He left Great Falls Fire Rescue as a battalion chief after serving the department for 25 years.

Van Son was selected as the best candidate after a nationwide recruiting effort and will take on fire marshal duties for Atascadero City. Additionally, he will be the lead for the many programs that operate under community risk reduction. As Fire Chief Bryson announced the appointment, he said, “We are eager to have Dave as our new Battalion Chief of Community Risk Reduction. This role is incredibly important in our organization and for the residents of Atascadero. We look forward to the experience he brings to support and continue the growth of these vital programs within our community.”

Van Sonave and his wife, Jill, now reside in Atascadero with their 14-year-old twins. They also have two older sons who live in Las Vegas and Chicago.