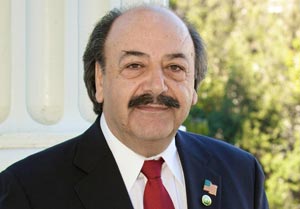 – Governor Jerry Brown has announced that he has signed Assembly Bill 2254, authored by Assembly member Katcho Achadjian (R-San Luis Obispo). This bill adds the Atascadero Armory to the list of armories that can be used as a temporary shelter for the homeless population during the winter months without prior approval of the Adjutant General.

“We must take advantage of existing resources to address the growing need for shelter in our region,” said Achadjian. “This bill will allow our local officials to take immediate action and provide much needed relief for the many homeless that continue to go unsheltered.”

The most recent count in January 2015 identified over 1500 homeless individuals in San Luis Obispo County with a majority, 1,123, unsheltered, according to Achadjian. While many organizations are dedicated to serving the homeless community, there are only 166 beds made available on a regular basis. An additional 5 warming centers have been opened throughout the County with additional beds; however, these centers are only open on certain nights, under certain conditions, and some never at the same time. The Central Coast has seen an overall increase in those seeking shelter during times of extreme weather.

The bill will assist the City of Atascadero and San Luis Obispo County in providing basic necessities for those most in need.

Coauthored by Senator Monning, Governor Brown’s approval comes on the heels of unanimous bipartisan support in both houses of the Legislature. The bill was signed into law Thursday and will take effect on Jan. 1, 2017. Find more information at www.leginfo.ca.gov.

Stay up=to-dat on news in Atascadero by subscribing for free to the A-Town Daily News. Click here to sign up.