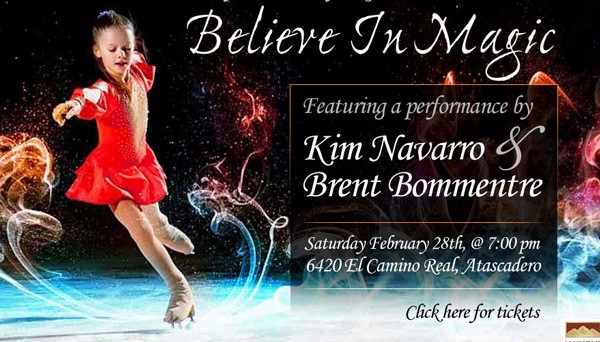 Atascadero Blades on Ice will be featuring over 50 local skaters from their skate school classes, and for the first time ever national competitors Kim Navarro, Brent Bommentre, Telar McClure, Dayle Morris, and KSBY’s own Amanda Starrantino. Believe in Magic will share the thrill of gliding across the ice, while celebrating the third year of ice skating here on the Central Coast.

The brainchild of proprietor Derek Ehinger, Atascadero Blades on Ice has been the first ever ice skating venue in San Luis Obispo County that offers a full spectrum of ice activities for families. “I wanted my daughters to have the opportunity to pursue ice skating,” said Ehinger when the facility first opened three years ago, “and for people from all over the Central Coast to have it too.”

Whether you want to learn to skate, play hockey, to get in shape, or just have some place to take the family for a good time, Atascadero Blades on Ice has something for everyone. “We are the first ice skating facility that remains open beyond the seasonal rinks that have come and gone over the December holidays.” Says Skating Director Theresa Anselmo.

The extended season allows Blades on Ice to build programs for skaters of all skill levels from novice to advanced. “You don’t have to know how to skate to come enjoy ice skating, I can guarantee we have something for everyone” says Anselmo who ice skated most of her life in Denver, Colorado prior to relocating to SLO County in 2011. “I have gotten so much from ice skating from physical fitness, and coordination, to poise and self-confidence. It’s great have the chance to pass on my joy and passion (for skating) to a new generation of skaters.”

The performance of Believe in Magic will be Saturday, Feb. 28, at 7 p.m. Programs set to music will feature skaters that have taken part in Atascadero Blades Skate School, national guest stars, and Skate School coaches and rink staff and volunteers. “We hope that this performance will give our skaters a chance to show their family and friends what they have learned during this skating season” says Anselmo, “as well as generate interest from the community to put on skates, and try out some moves for themselves.”

Tickets are available at www.atascaderoblades.com or at the box office. Atascadero Blades on Ice will remain open for public skating through March 15.