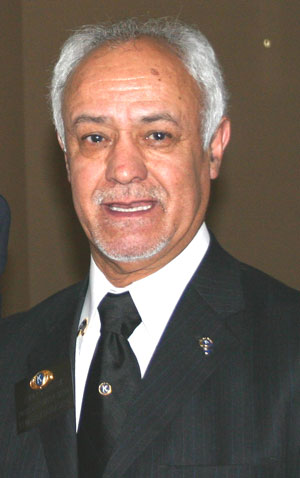 The Atascadero Chamber of Commerce announced this week that Jimmy Quinonez is the 2014 Citizen of the Year. The award will be presented Jan. 10 at the chamber’s annual dinner to be held from 6-10 p.m. at the Lake Pavilion in Atascadero.

From age 10, when he became an altar boy at St. Patrick Parish, Quinonez has served others — with no expectation of personal reward or recognition — simply to help make their lives better, according to a press release from the chamber. Making lives better is exactly what he has done in Atascadero.

Quinonez began serving the community in 2000, when he joined the Atascadero Kiwanis club. Highlights of his Kiwanis activities include participation in delivering weekly birthday cakes for three senior-care facilities, coordinating barbecues with other organizations and working with the Meerkat and Red River Hogs’ exhibits at the Charles Paddock Zoo. While president of the Kiwanis, he began raising funds for the Bandstand Project, then put the finishing touches on it as a paint-crew member.

An active member of the Veterans Memorial Foundation, Quinonez has organized the Memorial Day and Veterans’ Day barbecues and served as the foundation’s representative at various functions. As president of the foundation, he helped start the Highway 41 sign fundraising and participates in maintenance of the site.

Quinonez also participates in local causes such as the Mid-State Cruizers Car Club, as well as walking for ECHO, Alzheimer’s, Breast Cancer Awareness, American Heart Association and Relay for Life.

He has two children — Sandra, “a stay-at-home grandma,” and James, Jr., a pharmacist at Simi Valley Hospital. He also have bragging rights to six grandchildren and three great-grandchildren.