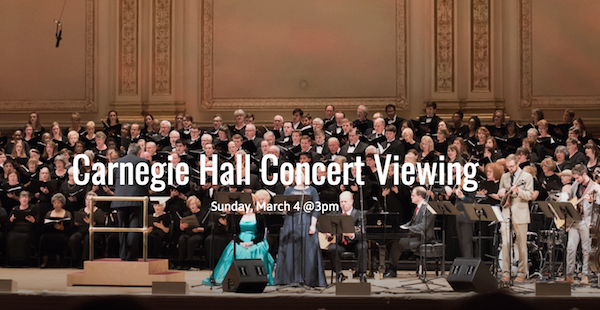 –Thanks to modern technology, the Atascadero United Methodist Church choir was discovered on YouTube when the choir performed a cantata by American composer and conductor Joseph Michael Martin in worship service. The choir was then invited to join 24 other choirs from around the country to perform the world premiere of Martin’s “Rhapsody in Bluegrass” in Carnegie Hall in New York City on Nov. 27, 2017.

“The United Methodist Church Choir in Atascadero received this invitation because of the quality and high level of musicianship demonstrated by the singers as well as the exceptional quality of their audition recording,” said Dr. Jonathan Griffith, artistic director and principal conductor for Distinguished Concerts International New York. “It is quite an honor just to be invited to perform in New York. These wonderful musicians not only represent a high quality of music and education, but they also become ambassadors for the entire community. This is an event of extreme pride for everybody and deserving of the community’s recognition and support.”

The church’s choir members and their guests traveled from Atascadero to New York City the day after Thanksgiving for a weekend full of rehearsals and sight-seeing before performing in Carnegie Hall the following Monday. Choir members spent nine to 10 hours over the five-day residency.

“Being invited to perform in Carnegie Hall was an honor, and performing in it was a delight. One of my personal highlights was getting to meet Joseph Martin,” choir member Lisa Rehfield said. “We perform several of his anthems at church, so it was neat to put a face to a name. As it turns out, he is quite a character. His humor and vivacity were inspirational to the choir as a whole. Should he ask us to perform another work of his, I will gladly oblige.”

Country music artists Dailey and Vincent were featured performers along with the large choir that was composed of 24 choirs from throughout the United States, including the Atascadero choir.

“I also loved singing in a big choir with very strong men’s voices,” choir member the Rev. Cherie Jones said. “At the first rehearsal, when we started singing the opening song and the music swelled around me, my eyes filled with tears at the enormous beauty of it all.”

The church will host a viewing party on Sunday, March 4 at 3 p.m. of the part that the Atascadero United Methodist Church’s choir was in. The entire community is invited to attend the viewing party, which is free to attend.
“I think one of the most memorable moments was when I realized that this big choir was really responding to the direction Maestro Martin was giving, and seeing his face when he realized it too,” choir member Carol Parente said.