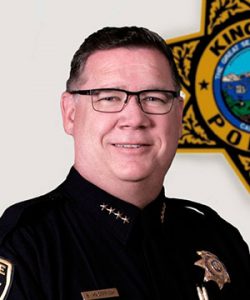 –The Atascadero City Council held a virtual meeting Tuesday night. City Council, staff and members of the community participated by teleconference calls to the Rotunda.

The council confirmed the appointment of Chief Robert Masterson as Atascadero’s new police chief. Masterson replaces Jerel Haley, who recently retired. Masterson is currently chief of the King City Police Department. Previously, he worked at College of Sequoia’s and with the Tulare County Sheriff’s Department. Besides a wealth of experience in law enforcement, City Manager Rachelle Rickard says Chief Masterson also has a good sense of humor.

Mayor Heather Moreno, and Councilmen Charles Bourbeau and Mark Dariz took the oath of office. Each won their seats in the recent November General Election. Moreno and Bourbeau were re-elected. Mark Dariz was elected to the council after spending ten years on the Atascadero Planning Commission. He takes the seat of Roberta Fonzi, who stepped down after a long tenure on the city council.

The council recognized City Councilwoman Roberta Fonzi, who stepped down from the council. City Manager Rachelle Rickard talked about Fonzi’s history with the city. Her family moved to Atascadero in the mid-1950s. She graduated from Atascadero High School, but moved away with her husband, Colonel Al Fonzi, and lived in many parts of the country. She served the City of Atascadero as a city council member and planning commissioner for 22 years. Each council member complimented Fonzi on her dedication. San Luis Obispo County Supervisor Debbie Arnold also called in to compliment Fonzi on a job well done. Fonzi thanked the council and wished them luck in the future.

The council approved an adjustment to a lot on 2945 Ramona Road, allowing for the construction of an additional residential unit.

In a speech to the council Rachelle Rickard advised the council and the public that the Strategic Planning Session will be held on Feb. 19 and 20. She advised people that under the governor’s latest stay-at-home order, the Charles Paddock Zoo is closed to the public, but the animals are being well cared for by essential staff.