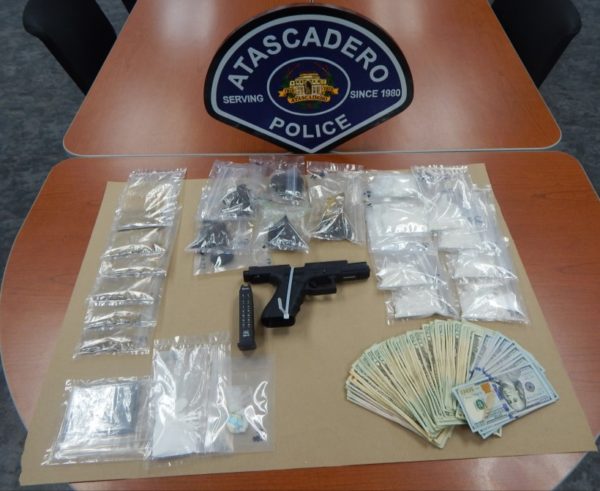 –Atascadero Police Detectives, following up on several investigative leads learned that a resident of Atascadero was possibly selling large quantities of narcotics and in possession of firearms. Detectives obtained a search warrant for the residence and associated vehicles. With the assistance of the San Luis Obispo Sherriff’s Gang Task Force and the San Luis County Probation Department, APD served the search warrant in the 7100 block of Sombrilla Ave on Tuesday, Oct. 17.

Prior to searching the residence detectives conducted a traffic stop on a vehicle being driven by the suspect, Jose Ramirez Jr., while simultaneously the residence was searched by another team per the terms of the search warrant. During the search of the vehicle and the residence detectives located almost a pound of heroin and several ounces of methamphetamine and cocaine. The narcotics combined for a street value of over $18,000. Detectives also located a loaded firearm with illegal modifications. Detectives located nearly $3,000 in cash, a stolen motorcycle and two stolen bicycles.

It was also learned that two small children reside in the residence which contain the narcotics and other illegal items. The children were not home during the incident and were later taken into protective custody by Child Welfare Services.

Both the father, Jose Ramirez Jr. and the mother Angelique Ramirez were arrested and booked into San Luis Obispo County Jail. Jose has since posted bail for the $100,000 bail and Angelique remains in custody on a probation hold.