Elks & Chamber will present certificates to businesses that display American flags to honor victims of 9/11, their families & loved ones 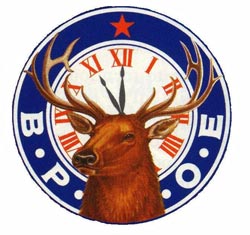 The Atascadero Elks Lodge #2733 in conjunction with the Atascadero Chamber of Commerce are encouraging area residents and businesses to display the American Flag on Thursday, September 11, to commemorate the anniversary of one of our country’s worst tragedies. The flag display will honor those who lost their lives on 9/11, their families, friends, and loved ones who continue to endure the pain and those who today are fighting at home and abroad to preserve our cherished freedoms.

Over the last several years Elks’ Lodges around the country have taken up the promotion and observance of National Patriotism Week. The purpose of Elks National Patriotism Week is to honor all of our nation’s protectors and heroes, both past and present. In addition, the week of Sept 8-14 encompasses the day of Sept. 11 (9/11) which has been nationally proclaimed as Patriot’s Day.

The Elks promote the ideals that the citizens of this nation live in freedom, won through the great sacrifices and many tribulations which have provided the foundation for a free, prosperous and independent life. Each generation must work to maintain this freedom, otherwise, through carelessness or indifference, the rights and liberties enjoyed may vanish.

Patriotism has characterized the Benevolent and Protective Order of Elks of the United States of America since the early days of the organization. Allegiance to the flag of our country is a requirement of every member.

Since its inception in 1987 the Atascadero Elks have contributed in excess of $550,000 to various programs including: youth activities, local sports, programs for handicapped and needy children, patriotic programs, veterans’ programs and many community activities. In addition, the Elks participate in drug awareness programs at our local schools and distribute dictionaries to all 3rd graders in the Area.

The Atascadero Elks Lodge was established in the City of Atascadero on September 26th, 1987. Their mission: To inculcate the principles of Charity, Justice, Brotherly Love and Fidelity; to recognize a belief in God; to promote the welfare and enhance the happiness of its Members; to quicken the spirit of American patriotism; to cultivate good fellowship; to perpetuate itself as a fraternal organization, and to provide for its government. The Benevolent and Protective Order of Elks of the United States of America will serve the people and communities through benevolent programs.