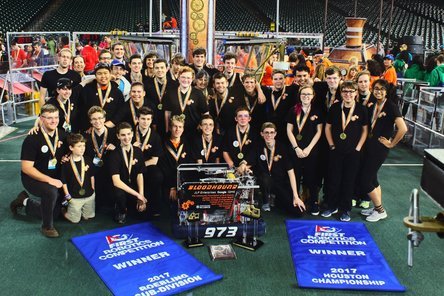 The Greybots at the 2017 Houston Championship.

–Team 973, The Greybots, reigning world champions of the FIRST Robotics Competition, won the Silicon Valley Regional, marking the first season they have won both of their regional events in their 16-year history.

The Greybots, a high school robotics team based in Atascadero, has students from all over San Luis Obispo County. This past weekend, they competed at the San Francisco Regional against 60 other teams from across California and the countries Brazil, the Dominican Republic, Australia, Turkey and China. This year, the team was challenged to compete in the 2018 FIRST Robotics Competition game, Powerup, where teams score “power cubes” in 1 foot and 7-foot tall teeter-totters and climb a 7-foot structure at the end of the match lifting another robot.

They were chosen by team 254 of Bellarmine College Preparatory, which was another reigning world champion team, and selected 2367 from St. Francis High School in Mountain View to join them both in the playoffs. The alliance went undefeated in the playoffs to win the competition and qualify for the FIRST Championship.

With the win of the San Francisco Regional earlier in the month, they have two wins coming into the FIRST World Championship in Houston, Texas. The Championship will take place from April 18 to 22.

The Greybots are a registered 501(c)(3) that provides STEM and robotics education for students in the Central Coast area. The high school team is the original and largest program, and are two-time world champions and nine-time regional winners. The Greybots start robotics teams for elementary and middle school students, assist local elementary school programs and run local robotics tournaments, and run a robotics summer camp in the Atascadero area.

For more information on the team and what they do, go to Greybots.com.