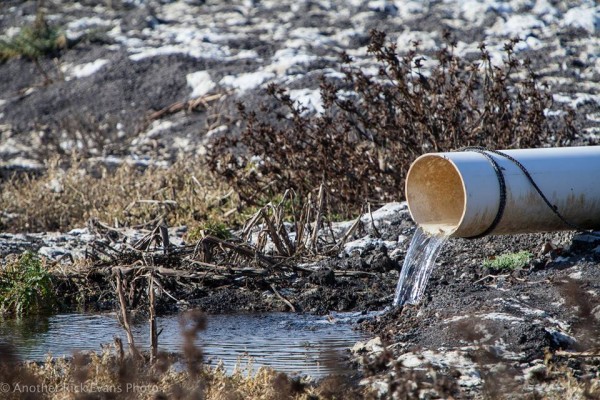 Water is now trickling into the dry lake from the lake fill pipelines. Photo by Rick Evans.

–Just over halfway through the rain season, Atascadero has an accumulation of 6.62 inches, although Atascadero Lake still does not have any significant standing water. Public Works staff has reopened the lake fill pipelines, which directs some water from Atascadero Creek to the lake.

Atascadero has gotten 2.37 inches of rain so far in the new year, according to the Atascadero Mutual Water Company gauge at the confluence of Atascadero Creek and Salinas Rainfall. The previous rain season reported 10.59 inches of rain and the 2013-14 year reported 9.21 inches. The city’s average rainfall is 17.42 inches. The season runs July 1 to June 30. 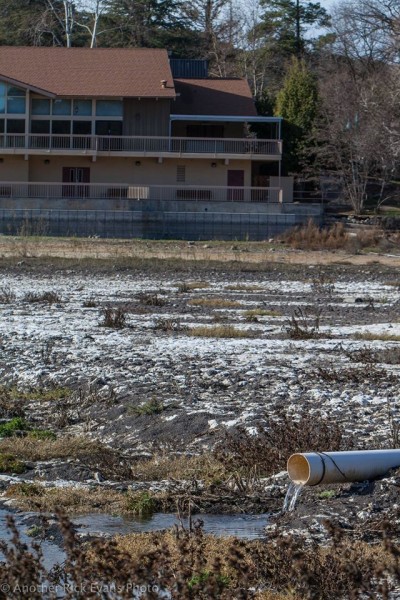 The goats that were contracted to perform weed abatement on the lake bed via Central Coast Green Goats have been removed from the lake because of the heavy storms expected last week and into the rainy season. According to a press release issued by the city in early January, about 75 goats have been grazing in the lake since October. The use of the goats have been a cost-effective, productive and natural removal, the release said. The city is expected to use the goats in the future for drainage swale clearance throughout the city.

Rain is expected to continue off and on over the next 10 days, according to Weather Underground.

Accumulated rainfall thus far is only .02 behind this time last year; however, the water company reminds people that “we’re not quite there yet.” In November 2015, Gov. Jerry Brown issues an executive order that extended restrictions to city water usuage through Oct. 31 if drought conditions continue past January.

That regulation includes a list of water usage that is prohibited for everyone as well as requirements for water suppliers and businesses.