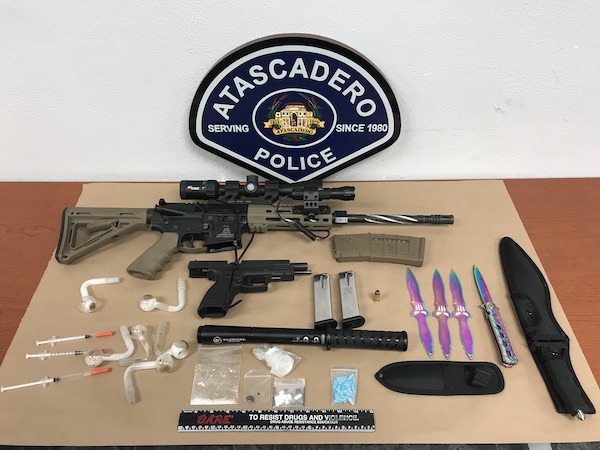 –On Tuesday, May 4 at approximately 2 a.m. an Atascadero Police officer was in the 9400 block of El Camino Real when he observed a person looking into a parked vehicle in a motel parking lot. Upon making contact with the subject, officers noticed he was acting suspicious and appeared to be concealing something in his waistband. The subject was detained and a fixed blade knife was found concealed under his shirt. The officers continued the search and found a .40 caliber pistol also concealed in his waistband.

Because he was in possession of a concealed firearm, Manuel Roy Catron Jr, a 27-year-old Atascadero resident, was placed under arrest. A search incident to arrest was conducted and Catron was also found to be in possession of three additional fixed blade knives, a switchblade, a baggie of suspected methamphetamine, a baggie of suspected heroin, and a baggie containing pills that Catron identified as Xanax.

A search of the vehicle was conducted and officers located a rifle, stun gun, drug paraphernalia, and additional pills.

Catron was booked into San Luis Obispo County Jail on the following charges;