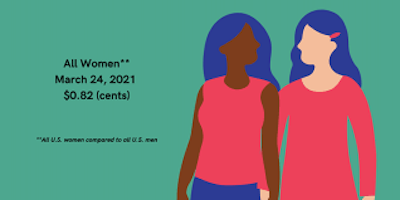 –Atascadero Mayor Heather Moreno has proclaimed Wednesday, March 24, 2021, as Equal Pay Day in Atascadero. The proclamation was read by AAUW member and Atascadero Councilwoman Susan Funk, who requested the mayor’s support, at the start of the city council meeting Tuesday night. Current AAUW President Linda Baker then thanked the mayor and made a few remarks.

Started by the National Committee on Pay Equity (NCPE) in 1996, Equal Pay Day symbolizes the gap between men’s and women’s salaries in a year. In 2020 on average women earned .82 cents for every $1.00 of their male counterparts. This year’s date in March symbolizes the extra three months into the new year an average woman needs to work to earn the same amount of money her male counterpart made the year prior. The numbers are even starker when separated out by race, with Black and Latina women’s equal pay days falling in August and October.

It is the rare family that can subsist on a single paycheck today. In 2019 about 57-percent of women over age 16 were in the labor force, comprising about 47-percent of all workers. Among married-couple families, over two-thirds of mothers are employed as are nearly three-quarters of unmarried mothers. Paying women equitably is in the interest of individuals, families, and our national economy. When a worker is not earning to capacity because she is female, everyone is held back.

AAUW (American Association of University Women) is the largest of the five branches of the national organization in SLO County. AAUW has been empowering women as individuals and as a community since 1881. For more than 130 years, the national grassroots organization has worked to improve the lives of millions of women and their families.