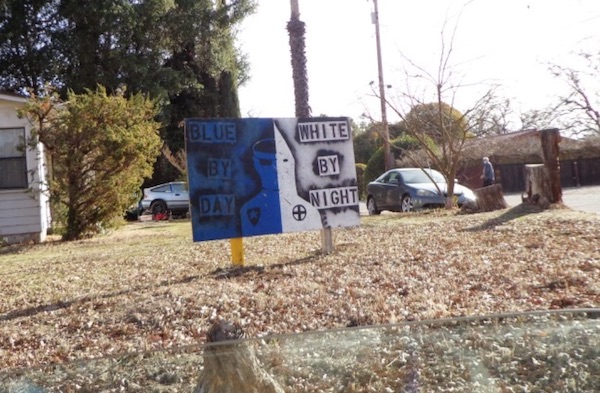 –A yard sign reportedly photographed in an Atascadero neighborhood is sparking controversy this week. Atascadero Police Chief Bob Masterson issued a statement in regards to concerns about the sign raised with the police department. He issued the following statement, titled “Freedom of speech statement from the Atascadero Police Department.”

“It is my firm belief that everyone has the freedom of speech as governed by the constitution and laws of California. Yesterday was the first I heard of the sign and my first reaction was to reach out to those residents in an effort to start a conversation with the people who live there. I want to understand their opinions and whether they feel it is reflective of our local Atascadero Police Department.

After careful consideration, I decided I would not want my actions to be perceived as interference with their freedom of speech. I would hope that the person who posted the sign would reach out to me so we may have this conversation. I am a new chief to Atascadero and do not believe our officers have any prejudicial views, but if there are, I would most certainly like to have that knowledge, so I may address it. I am a firm believer that all of us in society have some biases, but that it is important that we acknowledge those biases and engage in meaningful conversation with people to both acknowledge those biases and resolve them in a helpful way.”

Residents are encouraged to reach out to Chief Masterson at the Atascadero Police Department at (805) 461-5051.