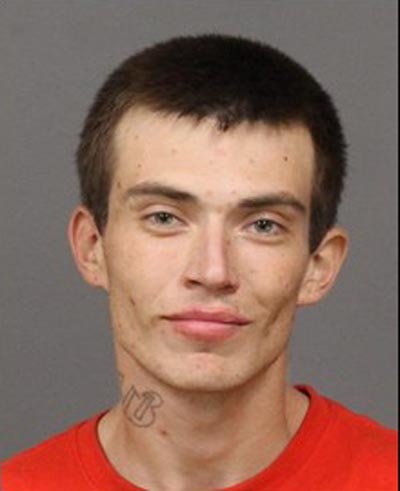 Wednesday morning the Atascadero Police Department received a report of a located, unoccupied stolen vehicle in the Santa Margarita area.

While in route, police were notified that a suspect had entered the vehicle and began driving towards Atascadero. Officers located the vehicle entering the south city limits.

Immediately upon activating the emergency lights and siren, the vehicle accelerated from polices and a vehicle pursuit was initiated.

Officers pursued the vehicle north on El Camino Real and attempted to disable the vehicle with the use of a spike strip, however it was ineffective.

Officers continued to pursue the vehicle northbound on US 101 as the vehicle drove erratically without any regard for citizens. The suspect quickly exited US 101 on the Rosario on-ramp and continued north on El Camino Real, attempting to evade officers in pursuit.

The suspect re-entered the freeway on the Santa Cruz on-ramp and continued north on US 101 at high rate of speed. The suspect unpredictably exited US 101 at Las Tables and traveled west on Las Tables.

Eventually the suspect’s vehicle was located on the west side of Templeton by the San Luis Obispo Sherriff’s Office and the California Highway Patrol. Deputies and CHP officers located the suspect in a vineyard after he had stolen an off-highway vehicle from the vineyard.

The suspect, Bradleigh Tabelin, 25, was taken into custody and later booked at the San Luis Obispo County jail. The suspect had an outstanding felony warrant for his arrest, a suspended driver’s license and is on felony probation. The suspect was booked on a felony charge of failure to yield and possession of a stolen vehicle.