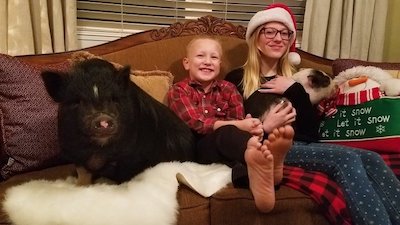 –Marilu Elder, who operates a pot bellied pig rescue in the south end of Atascadero city limits, has run into opposition from the city of Atascadero. The city code classifies swine as farm animals, regardless of the size and requires at least an acre of land. Elder, her husband and their two children operate K&M Mini Pot Belly Pig Rescue on a half-acre.

Elder was recently notified by Atascadero code enforcement that there had been a complaint about the facility. To keep the pigs at the current location, Elder needs to apply for a conditional use permit, at considerable cost. A public hearing is also required, giving neighbors the opportunity to voice support or opposition to the rescue operation.

Currently, Elder has 11 pigs, eight her personal pets and three looking for new homes. Pig owners can keep up to four swine, which includes three sows and one boar, on their properties. More than that number constitutes a pig farm.

Elder was captivated when her first pig, Roscoe, snuggled his head against her shoulder when they met. Elder compares her pigs to, “like having a dog.” Although Elder plan to apply for the permit, she thinks the city is wrong to classify pigs as farm animals. But, even Paso Robles, that allows up to three pot-bellied pigs under 24 inches tall on a property, still requires a conditional use permit for more than three pigs.

Although they do spend time in the house, Elder’s pigs have an outside shelter with shavings, straw and blankets. Elder said she started the rescue when she learned that so many pigs needed rescue. Many breeders promise “teacup pigs” that will stay small forever, but when the pigs grow the owners realize they need new homes for the pigs. A healthy pot-bellied pig can grow to around 150 pounds. Only two years ago, in 2015, CBS News reported that “teacup” pigs were being abandoned across the country. Some breeders encourage new owners to feed restricted diets to keep the pigs small, but not getting enough food creates health problems or starves the animal to death. In the CBS report, Anna Key, past vice president of the North American Potbellied Pig Association, estimated that 90 percent of pigs adopted in the United States wind up in rescue.

Elder is speaking to the Atascadero City Council on Jan 23 to appeal for reclassifying pot-bellied pigs as miniature animals. Elder has already gathered more than 1300 signatures on a petition on Change.org to present to the city. To donate to K&M Mini Pot Belly Pig Rescue, visit the “Support recognize mini pigs as pets” GoFundMe campaign.