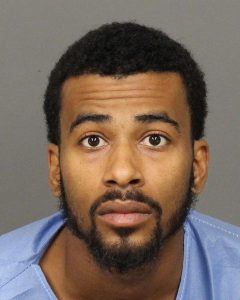 –The Sheriff’s Office is releasing new information regarding a shooting which occurred on Thursday in the 4100 block of Whispering Oak Way in rural Paso Robles.

Investigators are releasing the identity of the two suspects involved in this incident. One suspect is identified as 23-year-old Jaquan Jabriel Burns of Virginia. He was treated for a shooting wound in his lower leg and then booked into County Jail on a charge of attempted murder and outstanding warrants.

The other suspect is 23-year-old Karheem Graham-Luthhman III of Virginia. He is also at Sierra Vista Regional Medical Center with five gunshot wounds to his legs and arms. Graham-Luthhman has recently been transferred from the Intensive Care Unit to a less critical unit. He was booked in absentia on an attempted murder charge. He falsely identified himself as Fred Allen Cooper III. Upon further investigation, his actual identity was discovered to be Karheem Graham-Luthhman.

Detectives believe there was a gathering at the house on Whispering Oak Way when the two suspects, Burns and Graham-Luthhman, showed up to the home uninvited. When the victim opened the door there was a fight and then an exchange of gunfire. The victim and the two suspects each received gunshot wounds. It’s believed the suspects transported themselves to Sierra Vista Regional Medical Center for treatment. The Sheriff’s Office would like to acknowledge the San Luis Obispo Police Department for their assistance with security at the hospital.

Investigators do not believe this incident is gang related. At this time it appears to be drug related.

Investigators believe this is an isolated incident and there is no danger to the public. There are no outstanding suspects.

The investigation continues. No further information is available at this time.

–On Wednesday, deputies from the San Luis Obispo County Sheriff’s Office responded to multiple reports of gunshots in the 4100 block of Whispering Oak Way in rural Paso Robles. When deputies arrived they located an adult male shooting victim. He was transported to a local hospital. The extent of his injuries are unknown at this time.

The investigation continues to identify the suspects involved in this incident. It’s believed two adult male suspects transported themselves to a local hospital and each is being treated for gunshot wounds. The extent of their injuries are not known at this time.

Investigators believe this is an isolated incident and there is no danger to the public.

The investigation is continuing. No further details are available at this time.