–26-year-old David Gregory Grayhall, who escaped from the California Men’s Colony on Oct. 30, 2018, has been charged with three felonies stemming from his escape from prison. He is being charged with escaping custody, vehicle theft, and having a prior violent felony under the Three Strikes Law. Grayhall was serving a five-year sentence at CMC after a conviction in Los Angeles County. He was assigned to the work detail, inspecting state vehicles, when he took one of the vans, fleeing CMC and the County of San Luis Obispo.

The stolen van was located in Los Angeles, where several family members of Grayhall reside. After further investigation by California Department of Corrections and Rehabilitation and CMC staff, Grayhall was apprehended without incident in Los Angeles on Nov. 16, 2018.

Due to Grayhall’s violent prior conviction, his maximum sentence is 7 years and 4 months in state prison, if convicted. Grayhall’s arraignment is scheduled for March 19, 2019, in Department 3 of the Superior Court, the Honorable Dodie Harman presiding. 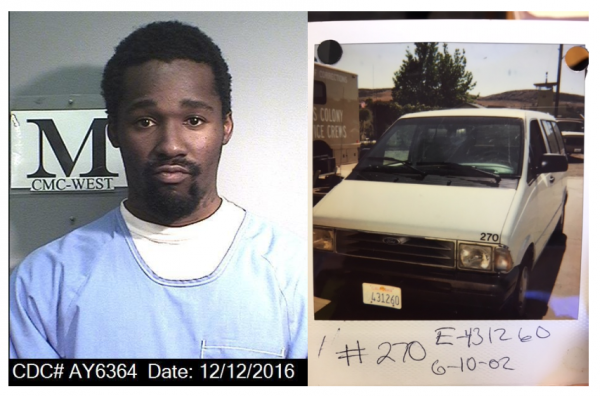 –California Department of Corrections and Rehabilitation (CDCR) officials are looking for inmate David Gray Hall, who was found missing this morning during count from California Men’s Colony (CMC) in San Luis Obispo.

Hall, a minimum-security inmate who is assigned as a worker in the CMC garage, was last seen at approximately 10 a.m. When CMC staff members went to check on Hall for the inmate count at about 10:15 a.m., they found that a state vehicle, a white 1997 Ford Aerostar van, California license plate number E431260, was also missing. By 10:35 a.m., CMC implemented escape procedures, deployed search teams, and alerted CDCR’s Special Service Unit, local law enforcement and the California Highway Patrol who is aiding in the search for Hall.

Hall, 26, is an African American male with black hair and brown eyes. He is 6 feet tall, weighs 184 pounds and may be wearing a lime green jumpsuit. Hall was admitted from Los Angeles County on Dec. 22, 2015, to serve a five-year sentence for second-degree robbery. He was scheduled to be released to parole in December 2019.

Anyone who sees the missing state van or has knowledge of Hall’s whereabouts is asked to call 911.

Since 1977, 99 percent of all offenders who have left an adult institution, camp, or community-based program without permission have been apprehended.