It’s serendipitous that former school teachers Doug and Nancy Beckett would come upon an old school house for their Peachy Canyon Winery tasting room. The Becketts moved here from San Diego in 1988 and founded the winery on Peachy Canyon Road. They then purchased the Bethel School House, (c.1870) on the west side of Paso Robles 15 years ago. 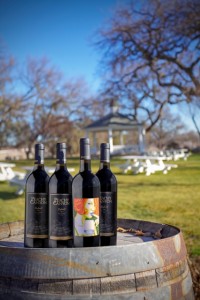 The Peachy Canyon tasting lineup offers an extensive range of wines from a selection of six Zinfandels (including a non-vintage Zinfandel Port) to a variety of other reds and whites.

“In 1988, we were one of four wineries on the west side,” recalls Doug. From a miniscule production of 500 cases to an annual production of 50,000, Peachy Canyon Winery has sealed its reputation as leading Zinfandel producers collecting awards along the way. In contrast to the typical big, bold Paso Zinfandels, Peachy Canyon’s signature Zinfandels are elegant with finesse.

“We make eight to nine Zinfandels a year and have received 90 points or better. That’s a tremendous statement for Peachy Canyon,” says Doug. Although the Zinfandels are scooping up accolades, the Ms. Behave Malbec recently won a Double Gold at the San Francisco Chronicle Wine Competition.

It was Benito Dusi who sparked the Zinfandel passion in Doug Beckett. “He let me have a couple of tons of grapes and said pay me when you can,” recalls the vintner. Since then this varietal has dominated Peachy Canyon’s portfolio, producing Zinfandels that are distinctly different. “When high alcohol Zinfandels became popular and cultish, we continued to make our style of varietally correct, fruit forward and low alcohol Zinfandel,” remarks Doug.

“We also have the rest of the spice rack,” confirms Doug, meaning bottlings of Petit Verdot, Malbec, Tannat, Mourvedre, Cabernet Sauvignon, two Chardonnays and a Viognier. All together, the winery produces some 18 different wines including Bordeaux-style blends and Rosés.

Last year, the Beckett family signed on acclaimed winemaker Terry Culton (formerly of Adelaida Cellars). Highly respected on the Central Coast, Culton has been hailed as “top-flight” winemaker by Robert Parker of The Wine Advocate. Culton takes over from Josh Beckett, who will serve in a consulting position and continue his executive role as a partner in the family-owned business.

Culton’s specialty is Pinot Noir. So, is he going to put his signature Pinot style on the Zinfandels? Yes, they might have a “Pinot-esque” touch, he comments. “I learned to make wine by making Pinot.” Culton notes that both varietals are thin-skinned. “We don’t use any acidulation and we pick early. We want bone dry Zinfandel.”

Peachy Canyon vineyards are SIP-certified. The sustainability practice ranges from composting (winery by-products are returned back to soil) to using beneficial insects for pest control. Weed control is done by hand. To prevent soil erosion barley is planted between rows in winter months and mowed back into soil during spring.

The sustainable farming is practiced in all four estate vineyards — the Old School House Vineyard, which is on the tasting room property and is in the process of being replanted, and three in the Nacimiento area – Snow Vineyard, Mustang Springs Vineyard and Mustard Creek Vineyard.

The tasting lineup offers an extensive range of wines from a selection of six Zinfandels (including a non-vintage Zinfandel Port) to a variety of other reds and whites.

Culton calls the 2011 Snow Vineyard Zinfandel most “Pinot-esque” – a layered wine with traces of herbs. Other 2011 vintage Zinfandels include the velvety Especial and the decadent Mustang Springs, rich with chocolate and caramel. The 2011 Devine Cabernet is multi-layered with aromas of black currant and nutmeg and the Para Siempre, a Bordeaux-style blend, is a well integrated wine with aromas of baking spice.

The white wines include two Chardonnays — a Chablis-style from York Mountain and one from Edna Valley that shows bright acidity with hints of green apples. The “Concrete Blanc’ Viognier is aromatic with traces of honeysuckle and is a perfect summer wine.

With such a variety to choose from, a visitor can spend hours tasting and taking in the serenity around the old one-room school house property. “There’s a great vibe here,” says Doug.

When visitors come to the tasting room and drive under the signature archway they get a sense that they’ve come home, he adds. “For every reason we’ve moved here we’ve been paid back ten-fold,” reflects the vintner who, with his wife Nancy, was once a school teacher in San Diego. “Now we are teaching about Zinfandel,” he says with a smile.