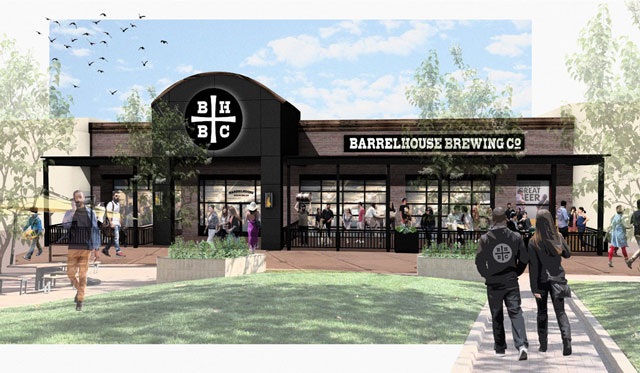 –BarrelHouse Brewing Co. this week announced the location of its newest taproom ‘BarrelHouse Riverpark’ in Fresno, Calif. The new location is slated to open in late summer of 2020.

“Even before we opened our latest taproom in Visalia in 2017, our sights were set on the Fresno area,” says owner Jason Carvalho. “I was looking for something very specific, so it took some time. This newest 6,000 sqft indoor space will also feature a large outdoor patio, live music, pinball machines and shuffleboard. This spot is a bit different for us because it’s located in the heart of one of Fresno’s hottest areas and we’ve always had to create the hot spot. The fire is already burning at Riverpark, we are just bringing the fuel to make it more of a bonfire than a campfire.”

BarrelHouse was established in 2013 by co-owners Jason Carvalho and Kevin Nickell along with longtime friend Chris Vaughn with a mission to bring together “Good People, Good Times, and Great Beer.” Since those early garage brewing days, BarrelHouse has quickly grown to be the largest American owned and operated craft brewery in San Luis Obispo County. “Being an American, family-owned business is something that we take pride in,” says Carvalho. “Our people are passionate about our mission and we are just getting started.”

Paired with a long lineup of bands and events, BarrelHouse is known for its delicious line-up of year-round beers: Standard Ale, Sunny Daze, Mango IPA, BarrelHouse IPA, Juicy IPA and Big Sur. Available everywhere BarrelHouse is sold. Some of its small-batch, taproom only beers, are only available at its three locations: Paso Robles Brewery and Beer Gardens, San Luis Obispo Taproom, or the newest Visalia Taproom and Beer Gardens.

Additionally, since the brewhouse first fired up, the BarrelHouse team has been crafting an impressive line-up of barrel-aged beers. Housed nearby in a dedicated Barrel Facility across the creek from their main brewery, you’ll find rare sour and wild ales referred to as their Salvaje de Robles (Wild of the Oak) Series and Reservado de Robles (Reserve of the Oak) Series for their non-sour barrel-aged beers. These limited releases are available in their taprooms and at fine craft beer accounts throughout their distribution network.