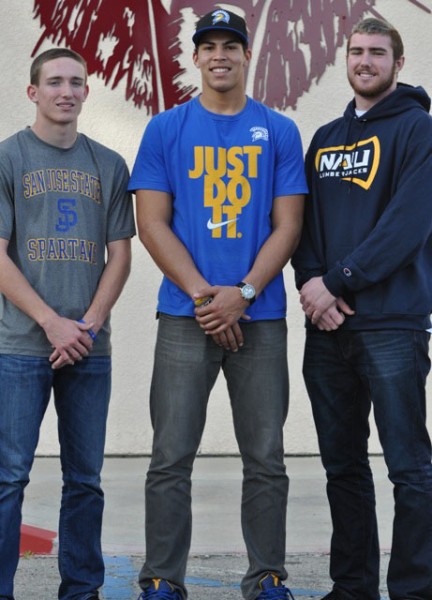 “Today we celebrate a significant milestone in the lives of these young men,” said PRHS Athletic Director Tom Harrington. “The journey is far from over, however. I challenge you to work harder even as you enter the world of NCAA athletics and in the classroom. I have two important mottos that I hope you adhere to: one is ‘work hard, play hard’ and the second is ‘the only easy day was yesterday.’ Those two will carry you through your entire collegiate career.”

Bearcats football coach Rich Schimke addressed his players, saying, “I want an autograph from each one of you! We had our challenges and difficulties this year, but you stuck with it, persevered and believed. You made my job and the job of the coaching staff an easy one and I want to thank you for bringing the excitement back to Paso Robles High School.”

Oliver said receiving a scholarship to San Jose State and preparing to play for the Spartans is “just a really huge blessing.” Keeping his eyes on his goals, he said “everything is paying off and a dream is being accomplished.” When asked about choosing San Jose State, Oliver said, “You can’t beat being just two hours away from home, the campus is beautiful, and the coaches are awesome.” 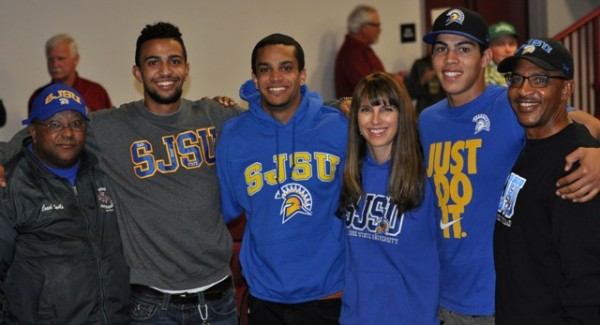 Josh Oliver, second from right, is surrounded by his parents Rene and Barbara, his brothers Jono and Ben, and Coach John Spells. Photo by Meagan Friberg

Oliver was flanked by his parents, Rene and Barbara, and his two older brothers, Jono and Ben. “For us, all of this has been really gratifying,” said Rene. “Josh has worked so hard and we are looking forward to this upcoming year; he is excited and we are just as excited as we think about watching him in San Jose.” Barbara said “Josh connected with San Jose State right away” and gave accolades to Coach John Spells for working with him since the age of 8 to strengthen his skills.

Baldwin chose Northern Arizona University after visiting the campus this summer and said “it just sort of clicked with me.” As far as his time playing football at Paso High, he said, “My dad was integral to getting me started with football and I have really enjoyed playing with all of the guys on my team. Coach Schimke pulled me up to varsity as a sophomore and all of his coaches have all been a huge help to improving my game.” 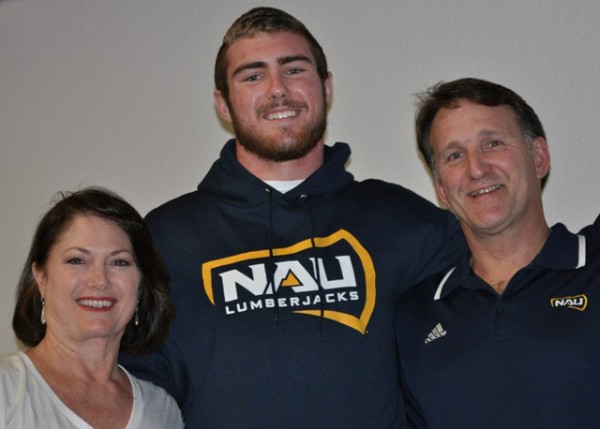 Patti and Rob Baldwin said their son worked “really hard.” “Jonathan started late in football,” said Rob, “and he realized after his junior year that he had the ability to play at the next level. From that moment on, he worked with his team, by himself, and with me and put in a lot of effort.” Patti added, “Jonathan is a sixth-generation Bearcat and he has always been determined to make sure traditions were carried on — he takes his legacy very seriously.”

When asked who was integral to his success as a high school athlete, Gaither did not hesitate, saying, “My family is always there for me even through the ups and downs, the wins and losses. I am very grateful to my family as well as my teammates, my coaches, and my friends — I would not be where I am without them.” Looking towards his time as a student-athlete in Northern California, Gaither added, “I have a lot of relatives that live in the Bay Area, so hopefully I will have a big crowd coming out to watch me when I play for San Jose State. 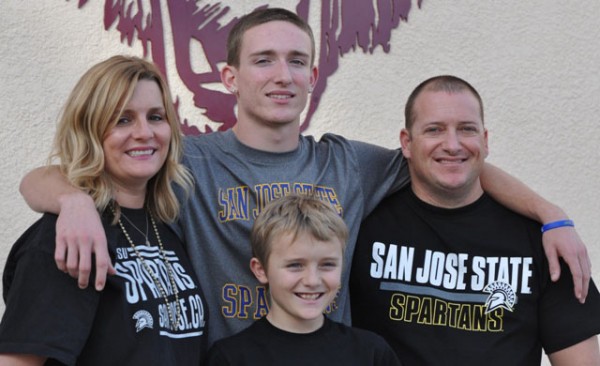 Gaither’s parents, Bob and Kari, displayed obvious pride and excitement for their son as they looked on during his interview. “I am just so proud of him,” said Kari. “Bailey has worked so hard and he never gives up. He is competitive, humble, sticks with his goals and he accomplishes them — this is such a proud day for us as parents and he should be proud of himself as well.” Bob added, “Bailey is a gamer and he was almost born with a ball in his hand. He is focused and nothing is going to hold him back. All three of these boys are amazing and they are representing Paso Robles in the best possible way as athletes.” 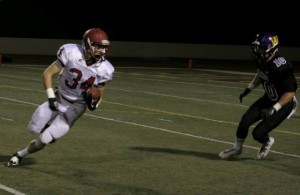 Bailey Gaither moves the ball past a Righetti player in a Bearcats’ win last season. Photo courtesy of Jennifer Railsback

Jonathan Baldwin will join the football program at Northern Arizona University. Baldwin, a three sport athlete (football, basketball, baseball), received All-CIF Southern Section, Northern Division honors as a member of the Bearcats CIF Championship football team this past season, and was named to the 2014 All-PAC 7 League Team in baseball as a pitcher. Northern Arizona University is located in Flagstaff, Arizona and competes at the Football Championship Subdivision (FCS) in the Big Sky Conference, along with Cal Poly SLO. The Lumberjacks are coming off a 7-5 record.

Josh Oliver and Bailey Gaither will take their talents up Highway 101 to San Jose State University. Oliver, a two sport athlete (Football and Basketball), was recently named the CIF Southern Section, Northern Division, Defensive Player of the Year, as well as being named to the All-State Division 3 First Team, and named the PAC 5 Defensive Lineman of the Year.