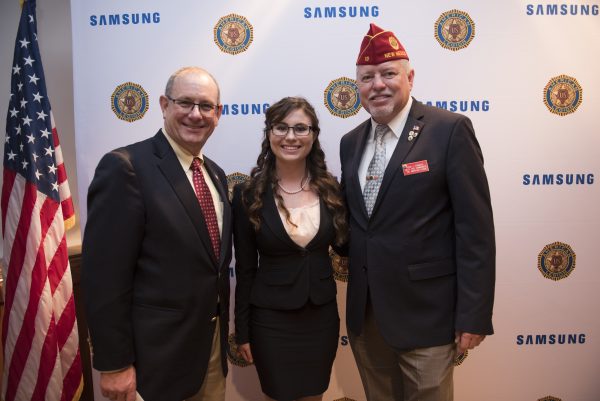 –Sadie Mae Mace, a recent graduate from Paso Robles High School, is one of ten scholars was selected from over 5,500 applicants across the nation. Each Samsung American Legion National Scholar receives a $20,000 scholarship for undergraduate expenses and the opportunity to be honored for their accomplishments in Washington, D.C.

Administered by The American Legion since 1996, this scholarship fund is endowed by electronics leader Samsung in appreciation of U.S. veterans, with emphasis on the families of those who served during the Korean War. National Scholars must be a direct descendant of a war-time veteran. Sadie Mae’s father is a veteran of Operation Iraqi Freedom.

While in Washington, D.C., Sadie Mae visited the Armed Forces Retirement Home to participate in a service project with Operation Comfort Warriors. Sponsored by The American Legion, Operation Comfort Warriors distributes care packages and provides recreational opportunities to military personnel and veterans recovering from wounds and illnesses at medical facilities and transition units around the country.

With the help of this scholarship, Sadie Mae plans to attend California Polytechnic State University at San Luis Obispo in the fall to pursue a degree in veterinary medicine.