Bearcats beat Arroyo Grande 19-14, improve to 2-2 for the season

–The Paso Robles Bearcats beat Arroyo Grande 19-14 Friday night. The Bearcats improve to 2-2 for the season, 2-2 in conference.

The Bearcats travel to Templeton next Friday to play the Templeton Eagles. It’s the first game between the two schools since 1924. They played twice that year, and Paso Robles won both games. The Bearcats hope to keep that streak alive Friday night in Templeton. The Tempelton Eagles were shut-out by the St. Joseph Knights 38-0 Friday night in Santa Maria. The Knights stopped the Eagles’ running game, and held them to under 50 yards passing.

Freshman quarterback Caden Cuccia passed effectively against the Eagles. Cuccia, who is talented far beyond his years, went 12-15 passing for over 150 yards. Caden was brought up from the JV team after the Knight’s starting quarterback was injured. Several Eagle players were injured in Friday’s game on artificial turf. Chase Richards, Will Evans, and Tyler Kaschewski did not play after halftime. Anthony Fischer was also injured and went out of the game for a while, but came back to finish the second half. Jake Stezle played quarterback in the second half for the Eagles and passed well against the tough Knight’s defense. Receiver Kale Loppnow caught five passes for 38 yards. The game was the first on St. Joseph’s new artificial turf. Athletic Director Tom Mott said they finished installing the field on Thursday of this week. 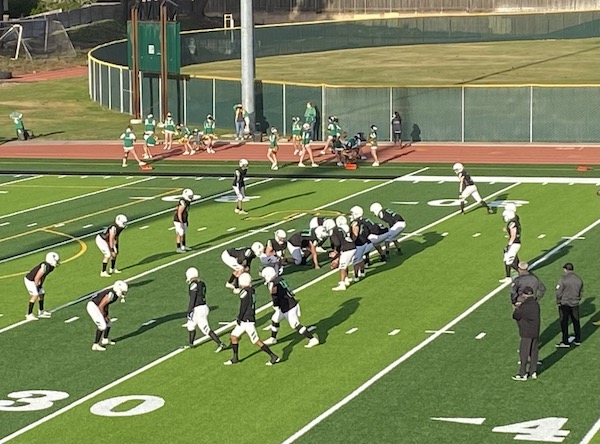 The Tempelton Eagles were shut-out by the St. Joseph Knights 38-0 Friday night in Santa Maria.

In Atascadero Friday night, the Greyhounds put up 19 points in the first half, and held the Morro Pirates scoreless. But in the second half, the Pirates scored 20 points to get the win 20-19.

The Greyhounds fall to 0-4 for the season. They will host Nipomo next Friday night.