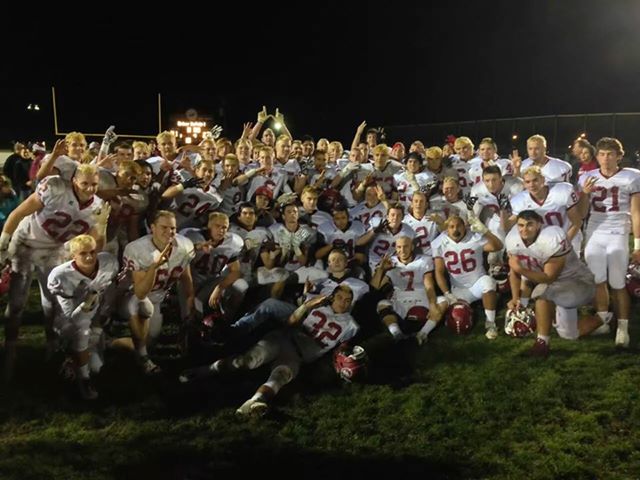 The Paso Robles High School varsity Bearcats gather to celebrate their 28-21 victory over the Arroyo Grande Eagles on Friday night. For the first time since 2000, the Bearcats will advance to the CIF Southern Section Northern Division football championship game. Photo courtesy of Bearcat Boosters

“It was a real nail-biter,” said Rich Schimke, head varsity football coach for Paso Robles High School. “It was exciting, fun, and boy — what a feeling to bring home the win — I’m just so happy for my guys.” 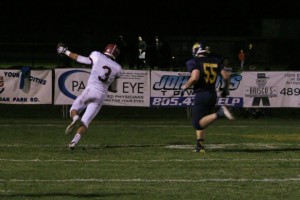 Bearcat Josh Oliver, after picking off a pass from the Arroyo Grande quarterback, takes the ball into the end zone to score for Paso Robles. Photo courtesy of Jennifer Railsback

A large contingency of Bearcat fans made the trip to cheer on the team and witness a rematch of another thrilling game, played during the regular season on Oct. 10, when the Paso Robles edged out Arroyo Grande, 28-27. Turnovers played a significant role in Friday night’s game, which featured four touchdowns scored on interceptions.

In what would be the first score of the night, the Bearcats’ Josh Oliver picked off a pass from Eagles QB Sawyer May at the Arroyo Grande 21 yard line and took it into the end zone to give the Bearcats a 7-0 lead midway through the first quarter.

The Eagles later drove to the Bearcats’ 30 yard line, were stopped by the Paso Robles defense, and fell short when they attempted a 46 yard field goal. On the Bearcats second play, QB Justin Davis’ pass was intercepted by the Eagles’ Bradley Mickey, who ran it in from 24 yards for a touchdown to tie the score, 7-7.

Davis was 10 for 22 on the night for 196 yards and two touchdowns, and four interceptions. 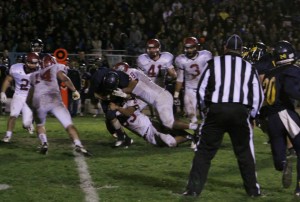 “Our strength was our defense,” said Davis, “they really won the game. Arroyo Grande was looking for revenge after our win earlier this year and we knew it was going to be a tough game.”

On a night where Paso’s Bailey Gaither would not catch his first pass until just before the end of the third quarter, it seemed like the Eagles would control the Bearcats’ passing game. Paso had the ball on their own 20 yard line after the kick-off and, once again, the Eagles’ Mickey intercepted a pass from Davis and returned it 27 yards for his second score of the night. The Eagles missed the PAT, but led the Bearcats 13-7 near the end of the first quarter.

“We had some pretty good drives to start the game, we moved the ball, played good field position and kept them backed up,” said Schimke. “The last time we played Arroyo Grande, we had trouble with interceptions and we did this game also — and I will take the blame for that. But our defense — they just played stellar. Hats off to Coach Reynolds and the defensive staff for having their players prepared. Both defenses — ours and AG’s — played phenomenal, really.” 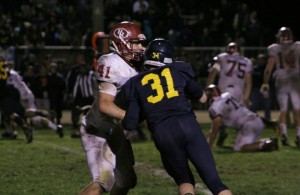 During the week leading up to the semi-final game, the Bearcat defense had been working on its physicality, according to middle linebacker Matt Keller.

“We knew that if we weren’t physical, we would not beat Arroyo Grande,” said Keller. “If we stayed physical on the front line, that’s the battle right there — physical, fast, play fair, and have fun. The front defensive line — Evan Espinoza, Jacob Stanko, and Michael Horne — they work their tails off every day and that’s what helped us win the game.”

In the second quarter, neither team was able to get much going offensively. On a fourth down at their own 43 yard line, the Eagles were in punt formation when the snap from the center sailed over punter Cole Ramey and rolled to the 17 yard line where the Bearcats took over with excellent field position.

The Bearcats used Gaither as a tailback and he gained eight yards to the 9 yard line. After a QB sneak by Davis, Gaither took a pitch, broke a tackle at the 6 yard line, and powered into the end zone for a touchdown. The PAT by Pasky was good and the Bearcats were back on top, 14-13. 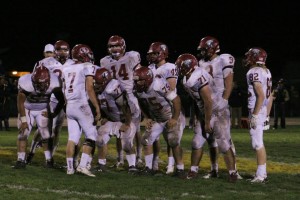 The Bearcats gather to listen to plays from quarterback Justin Davis. Photo courtesy of Jennifer Railsback

After an Eagles interception of a pass intended for the Bearcat tight end Oliver, Arroyo Grande drove the ball to the Paso 10 yard line. A pass from QB May was picked off by Paso’s Trevor Torres, who ran it back to the 31 yard line, preventing another Eagles score.

The second half did not begin well for Paso as the Eagles first possession took them to the Bearcats’ 43 yard line where they were forced to punt. The Bearcats got the ball at their own 13 yard line and, on their first play, QB Davis was intercepted for the fourth time. Arroyo Grande’s Thomas Fuentez ran the ball back for a touchdown and, after a two-point conversion, the Eagles led, 21-14.

The Bearcats regained momentum and, with three minutes left in the third quarter, Oliver, on a pass from Davis, ran 77 yards down the sideline for a touchdown. The PAT was good and Paso tied it up, 21-21.

Oliver finished the night with three receptions for 92 yards and a touchdown, and also contributed one interception return for a touchdown. 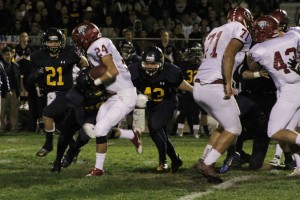 The fourth quarter was a back and forth battle between the two teams, with both unable to put a scoring drive together. With under two minutes left to play, the Eagles were forced to punt, giving the Bearcats one more chance as they had the ball at their own 38 yard line, with no time-outs remaining.

On the Bearcats’ first play, Davis passed to Gaither on a screen play. With the Paso crowd on its feet, Gaither put on an amazing demonstration of athleticism as he hurdled an Eagle defender and darted through the Arroyo Grande secondary, running 62 yards for the go-ahead score. The PAT was good and the Bearcats took a 28-21 lead over the Eagles with 42 seconds left in the game.

Gaither finished with 16 carries for 76 yards and one touchdown, and three receptions for 83 yards and one touchdown. Pasky was 4 for 4 on PATs and had key punt plays, with Schimke saying, “Bryce kicked the ball exceptionally well, placing it on the field on kick-offs, and his punts gave Arroyo Grande a long field to travel.”

The PRHS varsity Bearcats hold their helmets in victory after their 28-21 CIF win over the Arroyo Grande Eagles on Friday. Photo by Jennifer Railsback

The Bearcats (12-1 overall) were able to hold off the Eagles (11-3 overall) to claim the 28-21 victory and, for the first time since 2000, advance to the CIF Southern Section Northern Division football championship game.

When asked about the win, Davis said, “It’s amazing — this is what we have been working for all season, to be able to make it to the finals.”

On the same night, Atascadero lost to Newbury Park 49-48, and Templeton lost to Arrowhead Christian 40-30.

Paso Robles will host Newbury Park (11-2 overall) in a battle for the CIF championship title on Friday, Dec. 5 at War Memorial Stadium; game time is scheduled for 7:30 p.m.