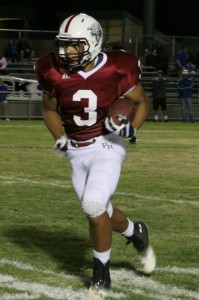 Josh Oliver scored a touchdown for Paso Robles in the first quarter of the Bearcats’ 42-7 win over San Luis Obispo on Friday night. Photo by Jennifer Railsback.

The varsity Bearcats, with quarterback Justin Davis in for injured captain Gunnar Griffin, took an early lead when Davis connected with a touchdown pass to Bailey Gaither with 3:11 remaining in the first quarter. Before the start of the second quarter, Josh Oliver scored for the Bearcats and Gaither walked in another touchdown.

“When we took the 21-0 lead, I think it was a back-breaker for SLO,” said Bearcats head varsity football coach Rich Schimke. “I looked up at the clock with 5 minutes to go in the first half and remembered last year when we were losing 24-0 to SLO at that point; our lead this year was totally unexpected.”

Jimmy Pacheco scored on a 3-yard run with 2:16 remaining in the first half and Gaither, in at quarterback, scored his third touchdown of the night on a keeper play 15 seconds before halftime to strengthen Paso’s stronghold over SLO, 35-0.

As the Tigers continued to struggle both offensively and defensively, the Bearcats came back just as strong in the second half as they had in the first. Nathaniel Harris scored a Paso touchdown with 9 minutes remaining in the third quarter and, with a 42-0 lead, it seemed as though the night would be a shut-out over SLO.

A 16-yard touchdown pass from Thomas Orradre to Dillon Walter gave the Tigers their only score of the night with 2:54 remaining in the game, but it was too little too late as the Bearcats earned their second consecutive PAC 7 League win and handed SLO their third straight loss of the season, 42-7.

Bryce Pasky was 6 for 6 on PATs. Davis went 7 for 10 passing for 154 yards and three touchdowns and Gaither caught four passes for 91 yards, scoring two touchdowns and walking in one. Harris rushed for 147 yards on 22 carries, including a touchdown and Jon Barrios had 59 yards on eight carries.

“I have to give a lot of credit to my scout team,” said Schimke. “They did a great job of emulating the SLO offense during practice this past week.”

The Bearcats (4-1, 2-0 PAC 7) are back on the road next week in a non-conference battle with the Kingsburg Vikings (5-0 overall), a team they beat 55-27 during Paso High’s Homecoming game last year. The Vikings currently hold a 33-game winning streak for games played on their home field – a streak the Bearcats are hoping to put an end to on Friday, Oct. 11 at 7 p.m.