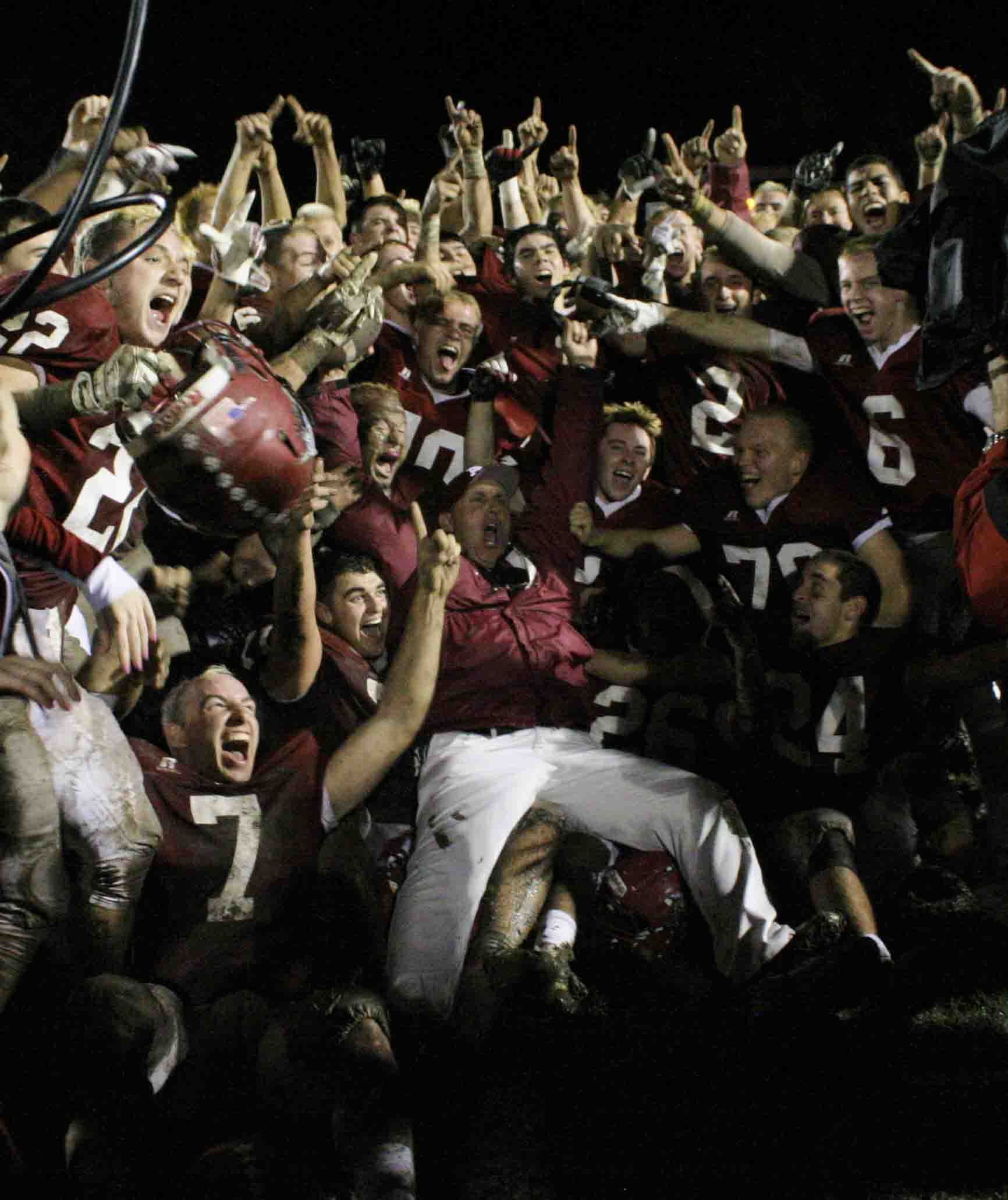 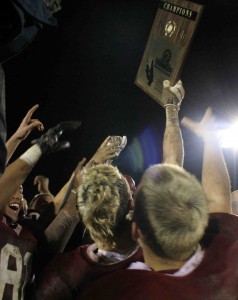 The Bearcats hold their CIF championship plaque high in the air Friday night amid the cheers of the hometown Paso Robles crowd. Photo courtesy of Jennifer Railsback

“It’s an incredible feeling,” said Rich Schimke, PRHS head varsity football coach. “It’s been a long time coming, but this is an incredible group of guys. We’ve had our share of difficulties this season, and some injuries, but perseverance paid off.”

A standing-room-only crowd turned out to cheer on the Bearcats, with many enduring the rain and cold two hours before kick-off. Having the support of the loyal Bearcat fans, Schimke said, was a true motivation.

“What an atmosphere — playing to our crowd in our stadium definitely worked to our advantage,” he said. “One of our goals since the beginning of the year was to protect our house and give our fans what they deserve — and that’s winning. The Crimson Crew, the community, the parents — everyone has been incredible to us.

Drenched by rain prior to the start of the game, the field would prove to be a challenge for the Paso Robles (13-1) and Newbury Park (11-3) players — although the wet conditions ultimately worked to the Bearcats’ advantage as they used a game plan designed to focus on their running game instead of through the air.

Using wide receiver Bailey Gaither as a tailback in the “I” formation, the Bearcats were able to grind it out and control the line of scrimmage. Gaither finished with 28 carries for 205 yards rushing, and four receptions for 27 yards. 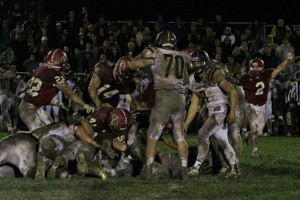 The Bearcats and Panthers battle it out on a muddy field at War Memorial Stadium. Paso Robes earned the CIF Northern Division championship title following a 13-10 victory. Photo courtesy of Jennifer Railsback

Schimke went with a formation using Matt Keller and Kasey Millsap as lead blockers to clear a path for Gaither as they slogged through the muddy field.

“This championship win is amazing, just phenomenal,” said Millsap after the game. “It honestly feels like a dream. The defense and the offensive line really stepped it up. And the coaches — Coach Schimke and all of the coaches — they work so hard for us and help us make it happen.”

The Panthers first scoring opportunity was stopped by a stubborn Bearcat defense when they held on a fourth and four yards to go at the Bearcats’ 7 yard line. The Panthers were averaging 44 points per game prior to meeting up with Paso, but most of those games were played on artificial surface.

The Bearcats were able to move the ball successfully but were hampered by nine fumbles throughout the game, losing three of them to the Panthers. Newbury Park would capitalize on one of those early in the second quarter when they kicked a 33-yard field goal, taking a 3-0 lead.

“It was difficult to control the pigskin — it was really slippery and really wet out there,” said Schimke. “It wasn’t from lack of practice, it was just hard to hold onto the ball — but we were able to overcome. The defense, offense, and special teams all fed off each other and I don’t think we could have put together a better football against a very quality opponent.” 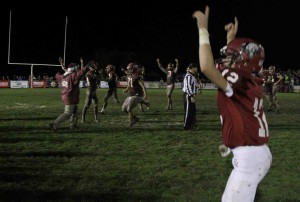 On Paso Robles’ next possession, the Bearcats drove to the Panthers’ 34 yard line and had a fourth down with four yards to go. With the Panthers expecting another run from Gaither, Bearcat tight end Jonathan Baldwin beat the defenders, caught a perfect pass from quarterback Justin Davis at the 15 yard line, and scored easily. The PAT by Bryce Pasky was good and the Bearcats were on top, 7-3 with 3:55 left in the first half.

The fourth quarter began with the Paso starting on the Newbury Park 45 yard line. The Bearcats gave the Panthers a heavy dose of Gaither as they powered to within inches of the goal line. Davis took the snap and followed his left guard into the end zone for a touchdown. After an unsuccessful snap on the PAT, the Bearcats led 13-10 with 7:22 left in the game.

The Bearcats defense came up big all night, stopping the Panthers on critical third and fourth downs. On a fourth and four at the Paso 40 yard line, Bearcat nose guard Jacob Stanko batted down a pass from Prieto intended for an open receiver over the middle, giving the ball to the Bearcats with 3:40 left in the game.

Attempting to run out the clock, the Bearcats drove to the Panthers’ 38 yard line. On a second down and seven, the Bearcats would lose their third fumble of the game on the snap, giving the ball back to the Panthers at their own 37 yard line with 2:45 left in the game.
With a fourth down and one yard to go, Newbury Park had the ball at their own 46 yard line. The hand off went to Panther running back Chucky Smith and he was stopped by Stanko and lineman Michael Horne for no gain.

The Paso defense was up to the challenge and the celebration was on as the Bearcats ran out the clock. The entire Bearcat team, coaches, and fans stormed the field and enjoyed the moment as Paso Robles earned its ninth CIF football championship in school history with a 13-10 win over Newbury Park.

“This was a team effort and that is the best part about winning the championship — just knowing that we did this together,” said Horne. “Our motto the entire year was ‘Together’ — the defense, the offense, the special teams — we look into each others’ eyes and we know we are going to get it done.”

It was only fitting that this victory was a total team effort and had contributions from all of the Bearcat players. The game was well played in spite of the fumbles caused by the wet conditions. The Bearcats await final announcements from CIF on Sunday afternoon on who will play for the Division III Southern California State Championship.

For more of Jennifer Railsback’s photos from the Paso Robles/Newbury Park game, go to www.facebook.com/2014PasoVarsityFootball. 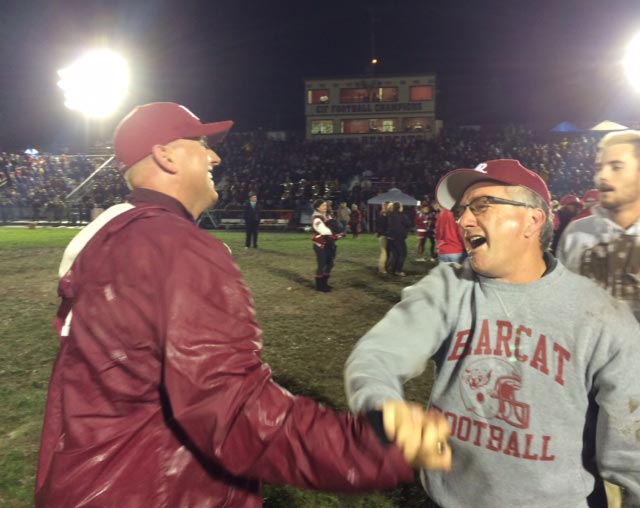 It was a full out team effort Friday night as the Paso Robles High School varsity Bearcats earned their first CIF football title since 2000.

Senior Bailey Gaither led the Bearcat attack, Jonathon Baldwin and Justin Davis scored one touchdown apiece, and the Paso Robles defense stopped a high-powered Newbury Park offense as the Bearcats earned a 13-10 victory over the Panthers to claim the title of the 2014 Southern Section Northern Division CIF Champs.

Look for the full game report on the Paso Robles Daily News this weekend — congratulations Bearcats! 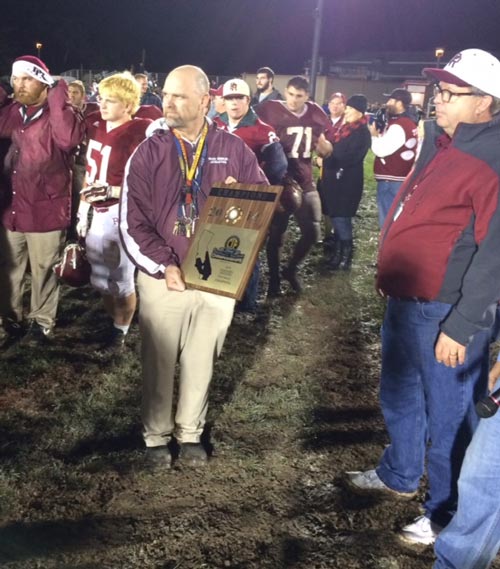 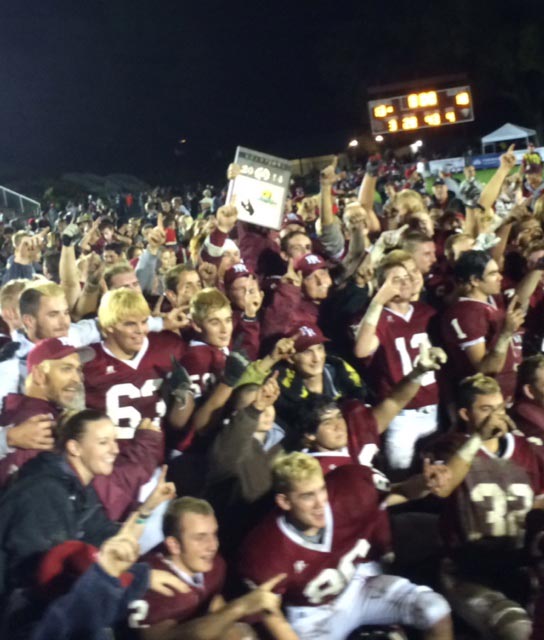