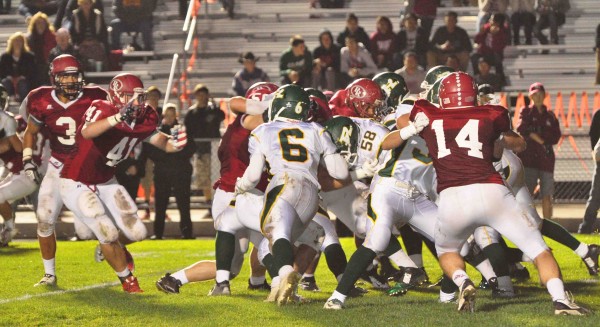 The Paso Robles Bearcats hosted the first round of the CIF Northern Division, Southern Section football playoffs on Friday night and handed the visiting Royal Highlanders a crushing 42-14 defeat. Photo by Meagan Friberg

Paso Robles varsity football advances to second round of CIF

The Royal High School Highlanders (4-6 overall, 1-2 Camino League) had high expectations as they made the trip up north on Friday night to play in the first round of CIF Northern Division, Southern Section football action, but they were no match against the Paso Robles High School Bearcats (9-1 overall, 3-1 PAC 5 League) and suffered a 42-14 defeat. 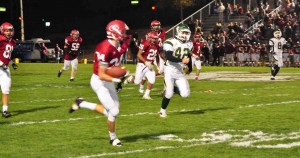 PRHS Bearcat wide receiver Bailey Gaither runs 99 yards for a touchdown on a kick off return. Photo by Meagan Friberg

The Paso Robles Bearcats hosted the first round of the CIF Northern Division, Southern Section football playoffs before an enthusiastic hometown crowd at War Memorial Stadium on Friday night and, rebounding after their disappointing loss to Atascadero last week, took control of the visiting Royal Highlanders from Simi Valley.

The Highlanders’ record of 4-6 was not a true indication of the tough lineup of opponents they had faced throughout their season — but they could not hold back the pressing force of the Bearcats, who were down two of their running backs with Christian Erickson and Mark Armstrong both out with leg injuries.

The Bearcats capitalized on an early Royal turnover when Parker Gray intercepted a pass from Highlander QB Matt Sciumbata at the Royal 20-yard line. Paso quickly scored on a 9-yard pass from QB Justin Davis to Josh Oliver. Bryce Pasky’s PAT was good and the Bearcats took an early 7-0 lead.

Royal put together an 84-yard scoring drive that resulted in a 1-yard touchdown run by RB River Meza, tying the score at 7-7 with 9:37 left in the second quarter.

Paso High’s Bryce Pasky kicks a PAT for the Bearcats during their 42-14 over the visiting Highlanders. Pasky was 6 for 6 on the night. Photo by Meagan Friberg

The Bearcats had an impressive drive with a mix of runs by Robert Mares and passes to Bailey Gaither. On a fourth and six at the Royal 13-yard line, the Bearcats came up one yard short and the Highlanders were able to stop the drive. The first half ended with the score tied 7-7.

The second half started off with a bang for the Bearcats, with Gaither returning the opening kickoff to the Royal 40-yard line. Two pass plays from Davis to Jonathan Baldwin would gain 26 yards for Paso and, two plays later, Davis hit Oliver for a 14-yard touchdown. The Bearcats had a 14-7 lead with 9:38 left in the third.

The Highlanders responded quickly, highlighted by a 48-yard pass from QB Matt Sciumbato to WR Johnny McGinty, to the Bearcats’ 15-yard line. Four plays later, Meza scored his second touchdown on a 2-yard run, tying the score at 14.

Apparently, the Highlanders didn’t learn from their previous kickoff because they let Gaither get his hands on the ball again. Gaither scooped up the ball at the 1-yard line and showed why he is one of the most dangerous offensive players in the state, running 99 yards for a touchdown. The PAT was good and Paso held a 21-14 lead with 6:18 left in the third. 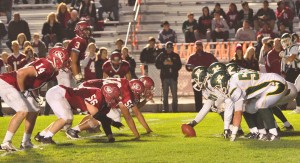 The Royal Highlanders were no match against the pressing force of the Paso Robles Bearcats. Photo by Meagan Friberg

It seemed as though the Highlanders would even the score on the ensuing kickoff. McGinty, fielding the ball, broke free up the middle before a shoestring tackle caused him to fumble at the 40-yard line and was recovered by Gray for the Bearcats.

On the first play after the fumble, Davis looked down the left sideline and threw a pass intended for Gaither near the 15-yard line. A Royal defender leaped high and appeared to intercept the pass, but the ball deflected off of his hands and fell right into Gaither’s waiting arms, and the Highlanders could only watch in disbelief as Gaither ran untouched into the end zone for his second touchdown. Stunned, the Highlanders found themselves trailing 28-14 with six minutes left in the third quarter.

The Highlanders were forced to punt on their next possession, and still need some convincing that Gaither was dangerous. They punted to Gaither at his own 30-yard line, he took the ball, ran down the sideline, and was forced out of bounds at the Royal 33-yard line. Mares carried the ball for the Bearcats down to the Royal 7-yard line and set up a touchdown by Gaither on a fly sweep, his third touchdown of the night. Pasky’s PAT gave the Bearcats a 35-14 lead with 11 minutes left in the game.

The Bearcats would add one more touchdown to end the night courtesy of Kasey Millsap on a 19-yard run, and held on to claim a 42-14 victory over the Royals.

With the win, Paso Robles will advance to the second round of the CIF Northern Division, Southern Section playoffs when they play host to Palmdale on Nov. 21.