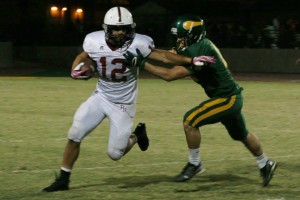 In a back and forth non-conference battle that came down to the final overtime minutes, the players on the Paso Robles High School varsity football team claimed a 28-21 victory over Kingsburg on Friday night, ending the Vikings’ 33-game at-home winning streak.

Paso High junior Bailey Gaither put the first numbers up on the board for the Bearcats with a 99-yard touchdown reception from quarterback Gunnar Griffin. With the PAT incomplete, Paso led Kingsburg, 6-0.

By the end of the first quarter, Kingsburg had taken a 7-6 lead. Paso scored again with 5 minutes remaining in the first half and the Bearcats’ attempt at a 2-point conversion was unsuccessful. With the scoreboard reading 12-7 in Paso’s favor, Kingsburg added another touchdown and PAT and, after a 36-yard field goal attempt by Paso fell short, held a 14-12 lead over the Bearcats going into halftime.

With added grit and determination, the Bearcats returned to the field in the third quarter and a 21-yard field goal by junior Bryce Pasky allowed Paso to gain a 15-14 advantage. Parker Gray added to Paso’s lead when he picked up a fumble by the Vikings and ran the ball 30-plus yards into the end zone for a touchdown with 3:30 remaining in the game. Pasky added the PAT and the Bearcats increased their lead to 21-14.

The Vikings had not lost a game in their home stadium since 2008 and, with the threat of their 33-game winning streak coming to an end, they powered in a touchdown and PAT with 1:20 remaining to even it up 21-21. Paso had the chance to end regulation time with a win by kicking in a 49-yard field goal, but the ball hit the upright and failed.

With no rules requiring overtime due to a tiebreaker in a non-regulation game, the coaches from the two teams met with officials and, before too long the decision to continue play in overtime was determined. With the Vikings and Bearcats each given the chance to put together plays and score from the 25-yard line, Nathaniel Harris scored on a 5-yard run and Pasky added the PAT to secure a 28-21 lead for Paso.

Kingsburg (5-1) then took possession of the ball and had the chance to send the game to a second overtime but, after taking the ball to the 15-yard line, the receiver in the end zone dropped the pass and the Bearcats claimed the win.

After three weeks on the road, the Bearcats (5-1) return to their home field at War Memorial Stadium on Friday, Oct. 18 for their 2013 Homecoming game against the St. Joseph Knights. Junior varsity plays at 4:30 p.m. and varsity at 7 p.m.

For more photos from the Paso vs. Kingsburg game, visit https://www.facebook.com/2013PrhsVarsityBearcatFootball